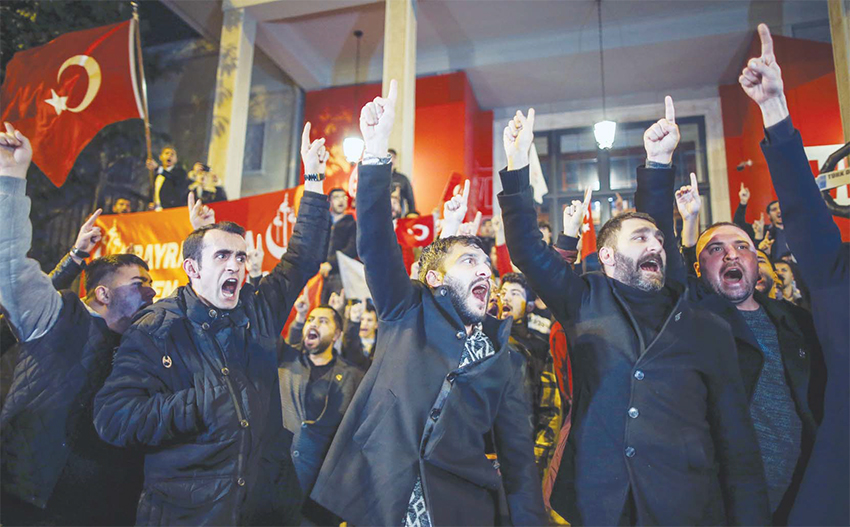 ISTANBUL: Outrage over a Quran-burning protest in Sweden produced a second day of protests in Turkey, reflecting tensions between the two countries. Some 250 people gathered outside the Swedish Consulate in Istanbul, where a photo of Danish anti-Islam activist Rasmus Paludan was set on fire. Paludan burned Islam’s holy book outside the Turkish Embassy in Stockholm on Saturday, sparking protests in Istanbul and Ankara that night. Participants in Sunday’s event carried green flags featuring the Islamic proclamation of faith and banner that said “We condemn Sweden’s state-supported Islamophobia.”
People chant slogans during a small protest outside the Swedish consulate in Istanbul, Turkey, Saturday, Jan. 21, 2023. Turkey on Saturday canceled a planned visit by Sweden’s defense minister in response to anti-Turkish protests that increased tension between the two countries as Sweden seeks Turkey’s approval to join NATO. (AP)
A sign on a window of the Swedish Consulate read, “We do not share that book-burning idiot’s view.” The protests have renewed concerns about Turkey holding up Sweden and Finland’s bid to join NATO. Turkey has not yet ratified the Nordic nations’ memberships in the military alliance, saying Sweden needs to address Ankara’s security concerns. Turkish officials slammed Sweden for allowing the Quranburning protest but President Recep Tayyip Erdogan did not comment on it during his weekend speeches.