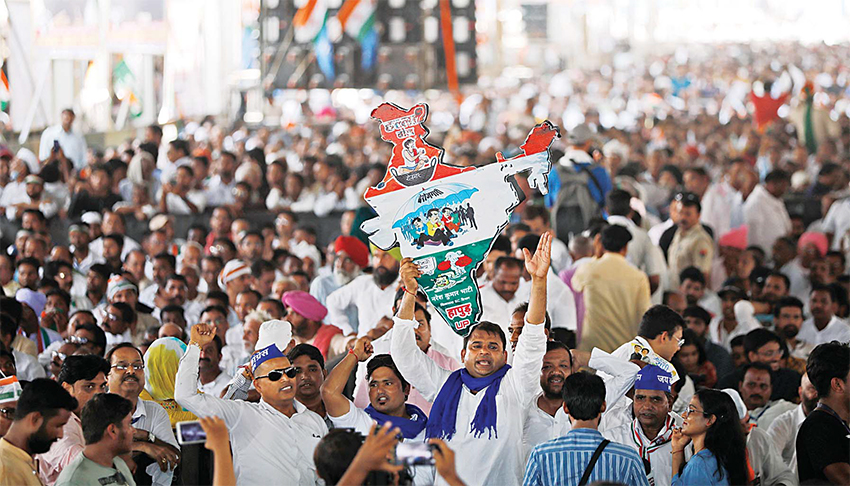 NEW DELHI: A massive protest gathering organized by Indian opposition party at Ramlila Maidaan in New Delhi urged the government to end price rise, hatred and anger in the country. Former President of Indian National Congress Rahul Gandhi told thousands of party supporters that hatred and anger has been increasing in the country ever since the BJP government came to power. “There is pressure on institutions such as media, judiciary, Election Commission, and the government is attacking all of them,” he said, noting that hatred is rising in the country as there is an increasing fear of inflation and unemployment.
Congress party supporters shout anti-government slogans during a rally in New Delhi, India on Sept 4. Thousands of people rallied on Sunday under key opposition Congress party leader Rahul Gandhi who made a scathing attack on Prime Minister Narendra Modi’s government for soaring unemployment and food and fuel prices in the country. Gandhi claimed that two industrialists namely Gautam Adani and Mukesh Ambani are benefiting from the hatred and fear and the ruling party is working for their benefit. “Be it airport, port, roads everything is being taken over by these two people,” he said, adding Modi’s ideology dictates that this two people should benefit while “our ideology says everyone should benefit from the country’s progress.”
The opposition leader also alleged that the policies of Modi government has weakened the country. “Narendra Modi is taking the country backwards, he is spreading hatred. Pakistan and China are benefiting from this.
PM Modi has weakened India in the last eight years,” he said. He also accused the government of stifling the voices of opposition saying the government has resisted every attempt to bring into discussion the plight of people due to price rise and unemployment. “Common people are in great difficulty. Opposition is not allowed to raise these issues in parliament, be it tensions with China, inflation, or unemployment,” he said.
The rally witnessed massive participation as the government authorities put in place a strong security arrangement. Several senior Congress leaders also addressed the audience. Today’s rally is part of a nationwide drive of the opposition party to bring the impact of Modi government’s policies on common people. The Congress party has planed to organize a massive campaign against the government policies starting from Kanyakumari, in southern most part of India to Kashmir in the northern most part of the country starting September 7 and covering around 3500 kilometres.
Gandhi is expected to interact with common people across the country highlighting the issues of price rise and unemployment in what is termed as the biggest ever mass contact programme of the party. “With this yatra, we intend to meet the common people and tell them about the lies spread by the government. This country does not belong to two people, but to farmers, labourers, and unemployed youth as well,” Gandhi said (KUNA)