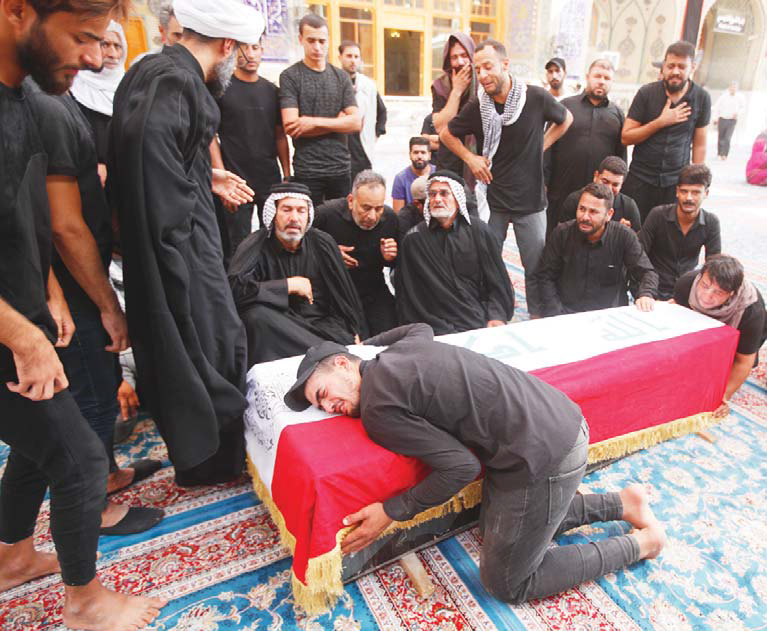 RIYADH: Saudi Arabia called on all parties and political forces in Iraq to stand united in order to preserve the rights and gains of the people. In a statement on Tuesday, the Saudi Ministry of Foreign Affairs said that it is following with great concern the developments of the situation in Iraq, expressing regret over the recent clashes that resulted in several deaths and injuries.
Relatives attend the funeral of a man killed during clashes with security in Baghdad during his funeral in Najaf, Iraq, Aug. 30, 2022. An influential Shiite cleric Muqtada al-Sadr announced Monday that he will resign from Iraqi politics, and hundreds of his angry followers responded by storming the government palace. The move sparked violent clashes with security forces in which at least 15 protesters were killed. (AP) Saudi Arabia supports all efforts aimed at sparing Iraq and its people the scourge of division and internal conflict, it mentioned. The Kingdom urged all parties and political forces in Iraq to resort to peaceful solutions to address the demands of the Iraqi people in a way that guarantees security, stability and prosperity for the country and its people. (KUNA)