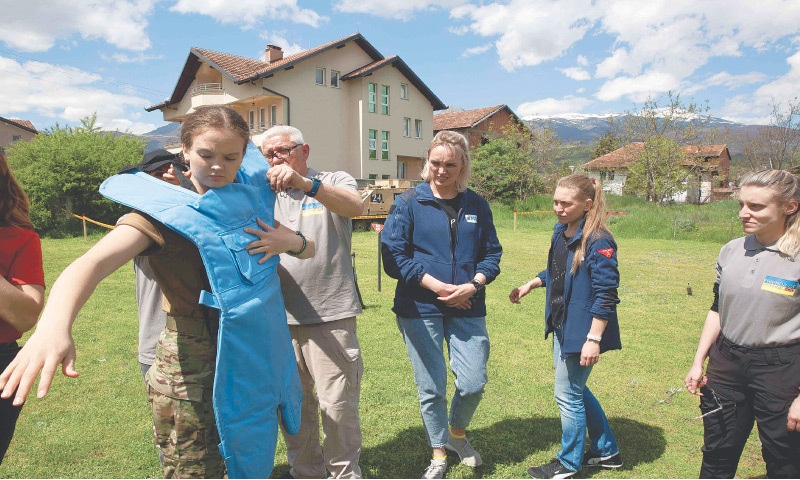 Peja (Kosovo): Ukrainian women attend a demining training programme in Kosovo, far from their homeland. Ukrainian women are taking intensive demining courses to help their country get rid of a huge amount of explosives that would probably take decades. For now, six women will do the almost three-week training while two others will join them later.—AFP

KYIV: Russia has warned of the “real” threat of World War III breaking out, ahead of a Tuesday meeting between the United States and allies over sending further arms to war-torn Ukraine.

Moscow’s invasion of its neighbour has triggered an outburst of support from Western nations that has seen weapons pour into the country to help it wage war against Russian troops.
But Western powers have been reluctant to deepen their involvement, for fear of sparking a conflict against nuclear-armed Russia.
Speaking to Russian news agencies, Moscow’s Foreign Minister Sergei Lavrov warned the risk of a World War III “is serious” and criticised Kyiv’s approach to floundering peace talks. “It is real, you can’t underestimate it,” Lavrov said.

‘It’s real, you can’t underestimate it,’ says FM Lavrov
For months, President Volodymyr Zelensky has been asking Ukraine’s Western allies for heavy weapons — including artillery and fighter jets -- vowing his forces could turn the tide of the war with more firepower.

The calls appear to be resonating now, with a host of Nato countries pledging to provide a range of heavy weapons and equipment, despite protests from Moscow.
In a landmark trip to Kyiv over the weekend, Pentagon chief Lloyd Austin and Secretary of State Antony Blinken met Zelensky and promised $700 million in new aid to Ukraine.

“The first step in winning is believing that you can win,” Austin told a group of journalists after meeting the Ukrainian leader. “We believe that we can win — they can win — if they have the right equipment, the right support.”
And on the invitation of the United States, 40 countries will also hold a security summit in Germany on Tuesday to discuss further arms to Ukraine — as well as to ensure the country’s longer-term security once the war is over.

Among the invited countries are European allies of the United States, but also Australia and Japan — who fear that a Russian victory in Ukraine will set a precedent and encourage the territorial ambitions of China.
Finland and Sweden — traditionally neutral countries that have been considering Nato membership since Russia’s invasion of Ukraine — are also on the guest list.

And on the Russian side, President Vladimir Putin is due to hold talks with Turkish counterpart Recep Tayyip Erdogan on Tuesday, his spokesman told RIA Novosti.