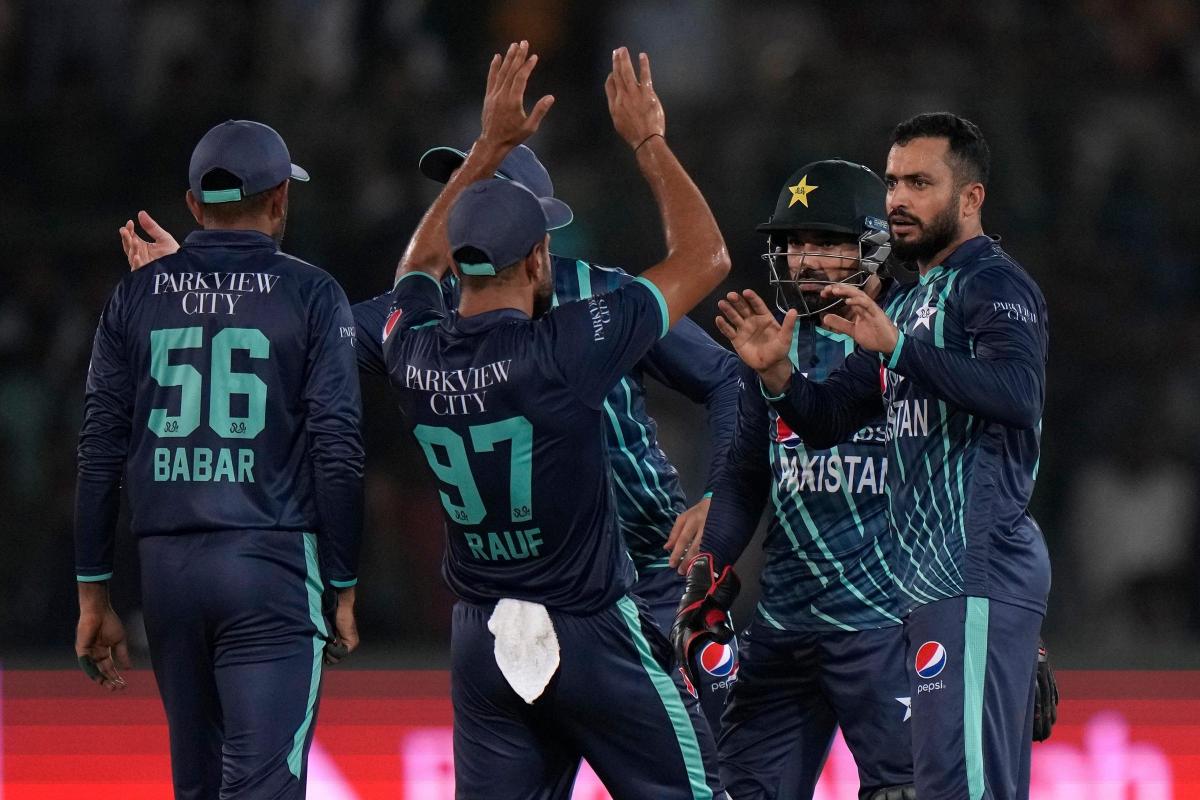 KARACHI: Pakistan pacer Haris Rauf said the spirit within the team was high after they secured a nail-biting victory over England on Sunday night to level the seven-match series at 2-2 ahead of the three decisive fixtures in Lahore.
Haris was at his devastating best at the death on Sunday as Pakistan snatched victory from the jaws of defeat, dismissing Liam Dawson and Olly Stone on consecutive deliveries in the penultimate over as the hosts edged past England by three runs to successfully defend the lowest ever total of 166-4 at the venue.
While it wasn’t a rip-roaring performance from Pakistan, the grandstand finish to the game saw the players backing each other in pursuit of victory.
“Every player goes through challenging periods during their career and as a team we back players who are enduring bad patches,” Haris told a post-match news conference.
“Those who are here are because of their ability to win matches and we believe in them as team-mates,” added Haris with the players in the current squad set to be the ones who will represent Pakistan at next month’s T20 World Cup in Australia.
“In cricket, everyone takes their time to learn and especially in T20 cricket, there can be good and bad days. What’s important is to believe in your own abilities.”
In an eventful 19th over, Dawson — who had smashed 24 runs off the previous over by Mohammad Hasnain — had swatted away Haris for a boundary of the second ball to take England five runs away from victory.
But Haris pulled Pakistan back in the game when his bouncer saw Dawson hole out to mid-wicket and he then cleaned up debutant Stone.
Haris was denied a hat-trick on review when his searing yorker hit Reece Topley on his boot but the England tailender was run out in the final over to spark Pakistan’s celebrations.
“It was an important match of the series and the approach was to never give up and thankfully we won it,” said Haris.
“When Dawson was playing Hasnain, I was observing his playing style and bowled to him according to a plan and got his wicket. I was confident about bowling well against the tailenders and believed that we will win the match from there.
“It’s the beauty of T20 cricket that the momentum sways from one team to another.”
England head coach Matthew Mott, meanwhile, said his the close finish is a learning curve for his side ahead of the remaining matches and the T20 World Cup.
“For us it was a fantastic opportunity to see ourselves under pressure and see how we coped,” Mott told reporters. “I thought we did it pretty well. They got over the line but we’ll draw plenty out of that experience
“It just shows in T20 you’ve never got the game done and Rauf’s over was outstanding under pressure and he bowled his team to victory.”
England captain Jos Buttler hasn’t featured in the series yet as he recovers from a calf injury but Mott said they will not take any risks with the batsman so close to the T20 World Cup.
“With regard to Jos, he’s still a while off, he’s not a player we want to take a risk on at this stage, so close to the World Cup, and it was a reasonably significant injury that he had,” Mott told reporters.
“So, he’s champing at the bit for a game, but we’ll just try and see how we go and maybe in the last game or two we might give him a chance.”
Mott, however, added that his players will be looking to win the series to take crucial momentum to the World Cup.
“We want to win the series as it’s important for us to get some momentum going in to the World Cup,” he said, adding that the seven-match series offered his side a chance “to tinker the team” ahead of the tournament.