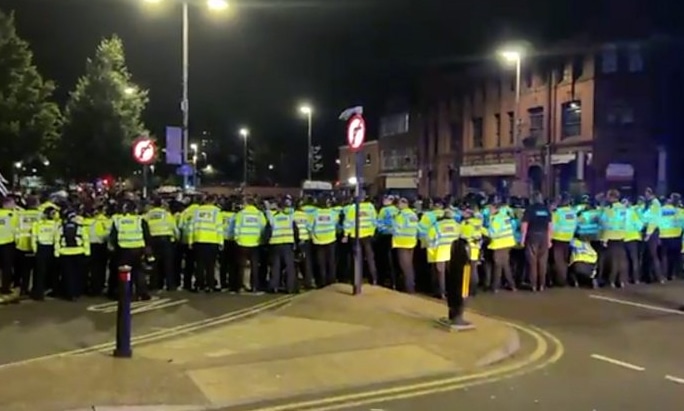 TENSION gripped the British city of Leicester on Saturday after young men from the Muslim and Hindu communities took to the streets to express their indignation over, what both groups alleged, manhandling of members of their fraternity, the BBC reported.
Police said they had made two arrests and that violence flared up after “an unplanned protest” — the latest in a series of several incidents following the Pakistan-India match during the Asia Cup on Aug 28.
Police will maintain a “significant presence” in the disturbed areas indefinitely.
Suleman Nagdi, of the Leicester-based Federation of Muslim Organisations, said while talking to the BBC: “What we have seen on the streets is very alarming.
There have been problems in the community since the India-Pakistan cricket match and while such games often spark gatherings, they have not in the past turned this ugly.
“We need calm. The disorder has to stop and it has to stop now. There are some very dissatisfied young men who have been causing havoc.”
Sanjiv Patel, who represents the Hindu and Jain communities across Leicester, said he was saddened by Saturday night’s disorder.
“We have lived in harmony in the city for many decades, but over the past few weeks it is clear there are things that need to be discussed around the table to get out what people are unhappy about.
“Across the Hindu and Jain communities and with our Muslim brothers and sisters we are consistently saying ‘calm minds, calm heads.”
He warned people to be wary of disinformation on social media.
Police said they had detained one man on suspicion of “conspiracy to commit violent disorder” and another on suspicion that he “possessed a bladed article”.
Leicester city mayor Sir Peter Soulsby said it was important that community leaders tried to de-escalate the situation, but he acknowledged it was a challenge to reach out to young people.
Community leaders were on the ground with police officers and called for calm, advising people to go home. Police said they had carried out “a large number of searches” in several neighbourhoods.
“Several incidents of violence and damage have been reported to the police and are being investigated,” a spokesperson said.
“We are aware of a video circulating showing a man pulling down a flag outside a religious building on Melton Road, Leicester.
“This appears to have taken place while police officers were dealing with public disorder in the area. The incident will be investigated.”
A woman who saw Saturday’s disturbances said there were people in balaclavas, with masks over their faces and hoods pulled up.
In an interview with BBC she said they were just everywhere. It was like crowds walking away from a football match.