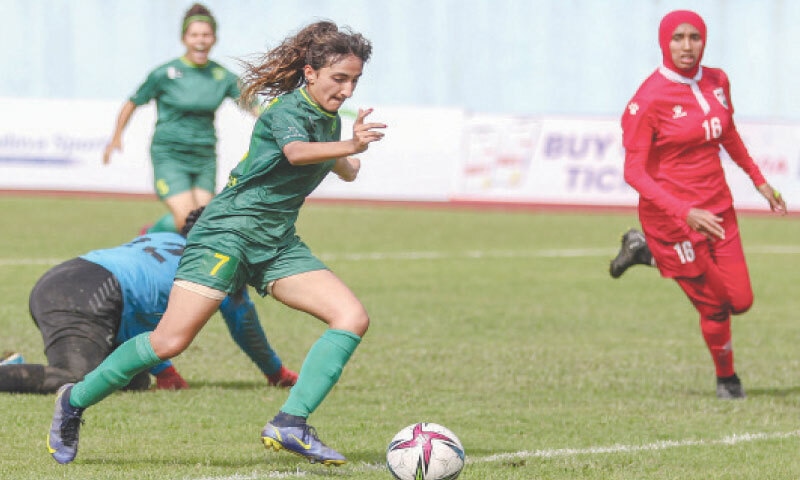 KATHMANDU: The moment Pakistan had been waiting for finally arrived in the 40th minute against the Maldives on Tuesday: the first goal for the national women’s team in eight years.
After that, the floodgates opened as Pakistan scored six more times with Nadia Khan getting four in the second half in a landslide 7-0 victory in their last Group ‘A’ match of the SAFF Women’s Championship here at the Dasharath Rangasala Stadium.
Finally, they could savour a victory; their first since 2014 and their biggest ever having opened the tournament with losses against India and Bangladesh respectively.
“This is the perfect launch pad for us … it doesn’t get better than this,” Pakistan’s head coach Adeel Rizki told a post-match press conference with the women’s team having missed out on international football for the best part of the last decade due to institutional crisis in the Pakistan Football Federation.
Even participation in this tournament would not have been possible had the FIFA suspension on Pakistan not been lifted in June.
“We could’ve said we couldn’t do this as we had very little time to prepare,” added Rizki. “But we took this opportunity by the scruff of the neck and had a camp for the last month. It wasn’t easy but we did everything possible to be here.
“We’re going to continue [with this momentum]. We will take a break after going back home and then we’ll try to get some national tournaments going and try to arrange more matches for the team.”
Already out of semi-final contention, Pakistan were looking to end the tournament on a high and tore apart the Maldives once Rameen Fareeed’s long-range effort beat goalkeeper Aminath Leeza on the bounce for the opening goal.
Khadija Kazmi doubled Pakistan’s lead three minutes into the second half from the penalty spot before Nadia took over with goals in the 53rd, 78th and the 84th, leaving the Maldives defence trailing in her wake with her pace.
“Previous two matches, we had different oppositions … teams that had been together for a long time,” Nadia, who plays for Doncaster Rovers Belles in England’s fourth tier, told reporters after the match.
“We had different strategies but in this game we knew that we have the ability to attack more but I still believe it’s the togetherness and belief in each individual players and trusting each other as well that pushed us through.”
Nadia added a fourth in the 90th minute before substitute Anmol Hira completed the rout in the fifth minute of stoppage time to leave Maldives winless at the tournament and notch up Pakistan’s biggest victory since their 4-1 win over Bhutan back in 2014.
Later, Bangladesh took first place in the group after a resounding 3-0 win over India, who have won all five editions of the tournament.
Jahan Shopna scored twice while Srimoti Krishnarani Sarkar scored the other goal as Bangladesh inflicted India’s first loss in the history of the SAFF Women’s Championship.
Bangladesh stunned India by taking the lead in the 12th minute when Srimoti’s brilliantly-weighted through ball was finished off by Jahan, who turned provider 10 minutes later as Srimoti found the back of the net.
Jahan got her second in the 53rd, this time converting from skipper Sabina Khatun’s pass as Bangladesh set up a last-four clash with Bhutan on Friday, when India will face hosts Nepal for a place in the final.