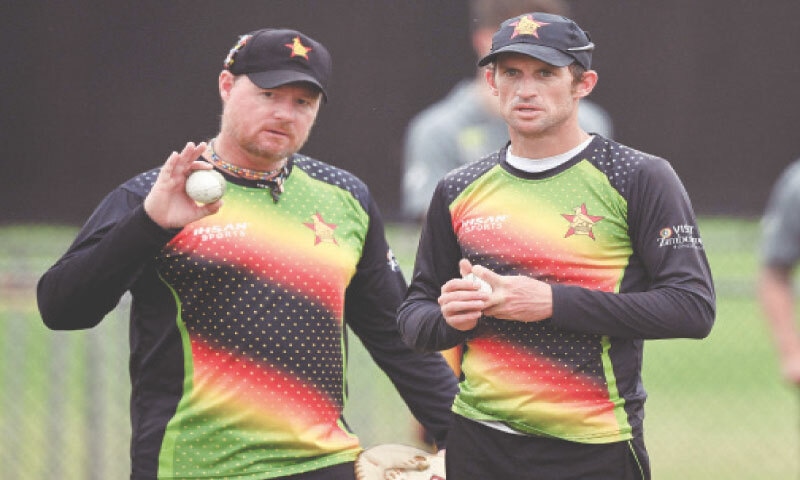 TOWNSVILLE: Zimbabwe batting coach Lance Klusener (L) speaks with all-rounder Sean Williams during a net practice session on Tuesday, ahead of the second ODI against Australia at the Riverway Stadium.—AFP
TOWNSVILLE: All-rounder Mitchell Marsh has been withdrawn from the squad for Australia’s five remaining One-day Internationals in Queensland over the next two weeks because of an ankle injury.
Wicketkeeper-batsman Josh Inglis has been called up to replace Marsh for the remaining two matches against Zimbabwe in Towsnville and the three-match series against New Zealand in Cairns.
The withdrawal of Marsh with ankle soreness was precautionary given his importance to the Twenty20 team, who will defend the World Cup they won last year on home soil in October and November.
“Not ideal for Mitch, he’s been playing some good white-ball cricket recently,” former captain Steve Smith told reporters on Tuesday. “And obviously the way we set up our team the other day with bulk all-rounders, he was a big part of that. Disappointing for Mitch but there’s some pretty important stuff coming up.
“He was a big part of our T20 World Cup campaign last year and I’m sure there’s big plans for him this year, so the priority is to get him right for that.”
Marsh took the first wicket of the Australia’s 2022-23 season when he had Zimbabwe opener Innocent Kaia caught and bowled in the opening one-dayer on Sunday, which the hosts won by five wickets.
Smith, who scored 48 not out, was happy with his first innings of the season and said he hoped to become a fixture at number three in Australia’s batting order in short format cricket. “Who wouldn’t want to be facing the newish ball in any white ball cricket?” he added.
“That’s where my record’s probably best. I think I’ve done a reasonable job over a period of time at number three and, yeah, that’s my most comfortable spot.”
The second ODI against Zimbabwe takes place at the Riverway Stadium on Wednesday.