Selection of army chief must not be politicised: Asif 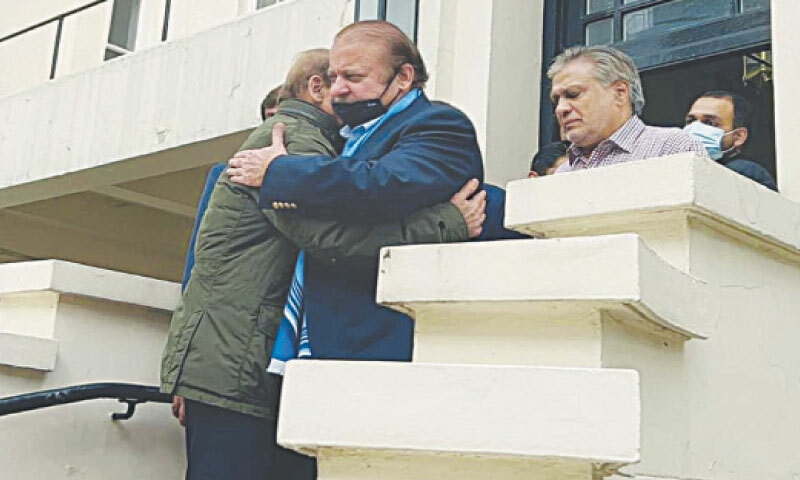 LONDON: As speculation around the appointment of the next army chief grows, Defence Minister Khawaja Asif told reporters in London on Sunday that the appointment “should not be politicised as it hurts the institution”.
Mr Asif is in London acco­mpanying Prime Minister Shehbaz Sharif, who is in the United Kingdom to attend the state funeral of the Queen on Monday (today), upon the invitation of the UK government.
PM Sharif, according to media reports, paid a visit to elder brother and PML-N supremo Nawaz Sharif and the two discussed several issues, including the time of general elections as well as a possible change of PTI-PML-Q coalition government in Punjab.
The Sharifs agreed that despite being under pressure, the PDM government would complete its constitutional term and the next general election “should be held at the stipulated time”.
The meeting deliberated on removing the Punjab government, led by the opposition PTI and PML-Q, and considered the name of Hamza Shehbaz, among other candidates, for the post of chief minister. The matter of important appoi­nt­ments due in November also came under discussion.
Shehbaz, Nawaz discuss change in Punjab govt; agree to hold polls on ‘stipulated’ time
The Sharifs had a three-hour meeting at Hussain Nawaz’s office in Stanhope House. The meeting, the brothers’ second in London since Mr Shehbaz became PM, was also attended by former finance minister Ishaq Dar and Mr Shehbaz’s son Suleman.
According to reports, Khawaja Asif and Minister for Information and Broadcasting Marriyum Aurangzeb did not participate in the meeting.
In response to a question, Khawaja Asif said: “It will be unfortunate if the army chief’s appointment is politicised by the opposition.
“But it doesn’t matter. As an institution, the army has its own sanctity (taqaddus), as does the process to appoint a new chief. It should not become the subject of debate because it hurts the institution.”
He further said: “The chief’s loyalty is with his country and then his institution. Army chiefs are not affiliated with any politician. His position and personality should not be made controversial”.
Mr Asif’s remarks were a veiled reference to the controversy stirred by the remarks recently made by PTI Chairman Imran Khan, who in an interview had hit out at the ruling coalition by claiming they want to appoint ‘their favourite’ as chief to ‘save themselves from corruption cases’.
Editorial: Chief concern
His remarks were construed by the military as ‘defamatory’ and as an attempt to undermine the army’s leadership.
“I appeal to all politicians and the media to stop making this into a discussion. Like in the past, two or three weeks prior to the appointment the process starts, and the chief is appointed,” he said.
Relief for flood survivors
Talking to reporters, the prime minister said friendly countries were extending assistance for the flood victims, adds APP.
He said relief goods were being brought by aeroplanes, trains and ships, adding that people of Pakistan were also giving donations and the federal and provincial governments were performing their roles in relief and rehabilitation of the flood-hit people.
The coalition government had allocated Rs70 billion and was giving Rs25,000 each to the affected families through the Benazir Income Support Progra­mme, he said.
Mr Sharif said the government was providing clean water, food, tents and other essential items to the flood victims through national and provincial disaster management authorities.