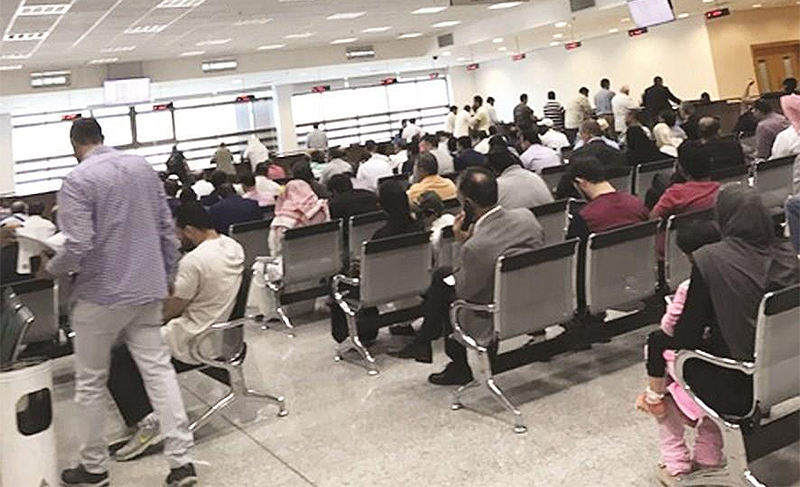 KUWAIT CITY : Two months after the issuance of the government decision to transfer the commercial visit to work permits to fill the shortage of workers as a result of the Corona pandemic and the failure of residence permits by thousands of expatriates, the Public Authority for Manpower (PAM) officially canceled this decision yesterday, and this came after the competent authorities had limited it to teachers, doctors and other professions and specialized jobs are required, but the suspension includes all jobs, reports Al-Qabas daily.

The suspension came after PAM had linked the automated system for issuing work permits to the ministries of Interior and Health at the beginning of November. Several conditions were approved for receiving new workers, including the approval of academic qualifications and vaccination certificates. A security source at the Ministry of Interior told Al-Qabas the absence of a PCC certified by the Kuwaiti embassy in Cairo was the reason why 1,500 Egyptians who arrived on commercial visit visas cannot transfer their visas to work permits. “Those who hold a commercial visa must leave the country within 30 days,” which is the period specified for the validity of the visa,” said the source. Occupations which are no longer allowed to transfer from business visas to work permits include doctors, the nurses, medical staff and teachers. The sources said the following steps are required to control the labor market – eliminate the visa trade, develop an advanced recruitment mechanism and prevent random employment..

An official at PAM pointed out that allowing the conversion of commercial visas to work permits was in place based on an administrative circular bearing No. 17 of 2021, which was issued on Sept 20 last even for some types of professions, including “educational, medical” in addition to other specialized professions, which were allowed to transfer due to the needs of the labor market, which now remains suspended. The official added, the conversion of commercial visas to work permits is linked to an assessment based on need of company or institution. It is not allowed to add a new estimate if there is no need in accordance with the requirements and regulations in force..

The official pointed out that there is a keenness on the part of the PAM and the Ministry of Interior to follow up on the status of the files that during the last period have issued commercial visas to workers, and work to control them to prevent fraud and trade in residence permits, especially since the government has made huge efforts to stop visa trade. The officials quoting PAM said, there is currently no need to issue more commercial visas to convert them into work permits, as it is possible through the PAM automated system and the electronic forms portal to issue direct permits for the desired labor according to the assessment of the needs of companies or government contracts and others. The Labor Department, he said, is completing the procedures for registering transactions by approving a work permit and then withdrawing the visa data, to enable employers to take the procedures for issuing a work permit for the first time through an easier portal in accordance with the procedures, in accordance with the administrative circular issued No. 17 of 2021.