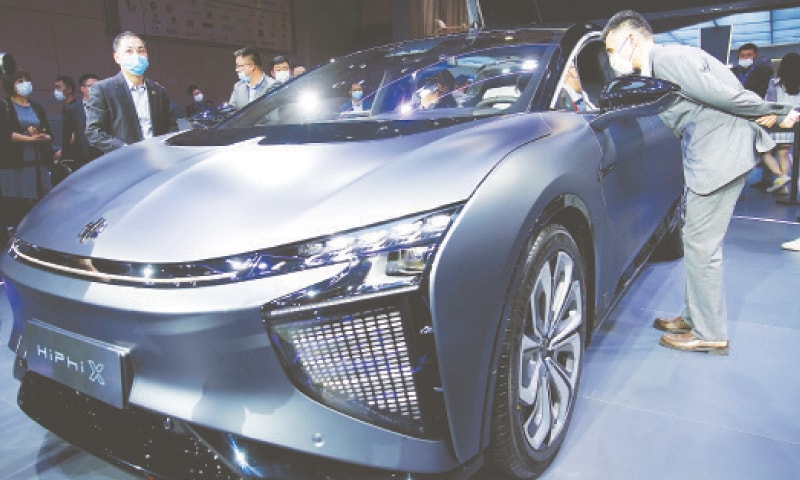 SHANGHAI: Thought Big Tech was taking over your life through smartphones? It may be coming for your car next as Chinese firms lead a stampede into auto manufacturing in their battle for more consumers.

Cars are the next major prize in the battle for digital territory, industry insiders say, and the deep pockets and data muscle of big Chinese tech firms will fuel even faster growth in “smart-electric” vehicles — and possibly hasten the arrival of autonomous cars.

In recent weeks, Chinese smartphone giants Huawei and Xiaomi, e-commerce leader Alibaba, and even DJI, the world’s top drone manufacturer, have thrown their hats into the ring.

“This sort of competition is a good thing and will greatly accelerate innovation,” William Li, founder, chairman and CEO of Chinese electric vehicle (EV) producer NIO, told AFP in an interview just ahead of the Shanghai Auto Show as it opens to the public on Wednesday.

The first major auto industry gathering of the year opens to the public with the global sector looking to China — the world’s biggest and most rapidly electrifying auto market — to lead the way into a post-pandemic future.

Sales in China contracted two per cent to 25.1 million vehicles last year — nearly one-third of the global total — but are rapidly recovering thanks to the expanding popularity of electric cars.

Just a tiny fraction of Chinese sales until recently, EVs accounted for around 9 per cent in March, according to official figures.

China’s government expects new-energy vehicles, which integrate the most advanced driving technology, to comprise 25pc of car sales by 2025, and recent announcements appear to bode well.

Xiaomi, which has rapidly become one of the world’s biggest smartphone suppliers, plans to invest $10 billion over the next decade in a smart EV subsidiary, and Huawei will invest $1bn this year.

Alibaba-linked autonomous driving unit AutoX has partnered with Japan’s Honda to ramp up testing on Chinese roads. Tech giant Baidu earlier on Monday said its Apollo autonomous navigation system would be installed on one million vehicles over the next three to five years.

The moves will focus fresh attention on Apple’s secretive project to develop a self-driving vehicle.

Cars represent a fresh opportunity for companies like Huawei that is now rushing to develop its own tech ecosystem after the US sanctions banned it from using Google’s Android.

“(Huawei) will enter a new track in the future, and with its own advantages, including combining software and hardware, will help promote lightning-fast development of smart cars and autonomous driving,” Chen said.

“This is very reassuring. (Tech companies) see there is an opportunity in this industry, which means that this industry still has a very bright future,” said Antoine Barthes, managing director of the automaking joint venture Dongfeng Nissan.