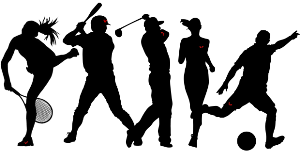 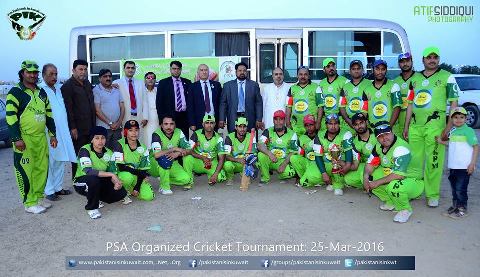 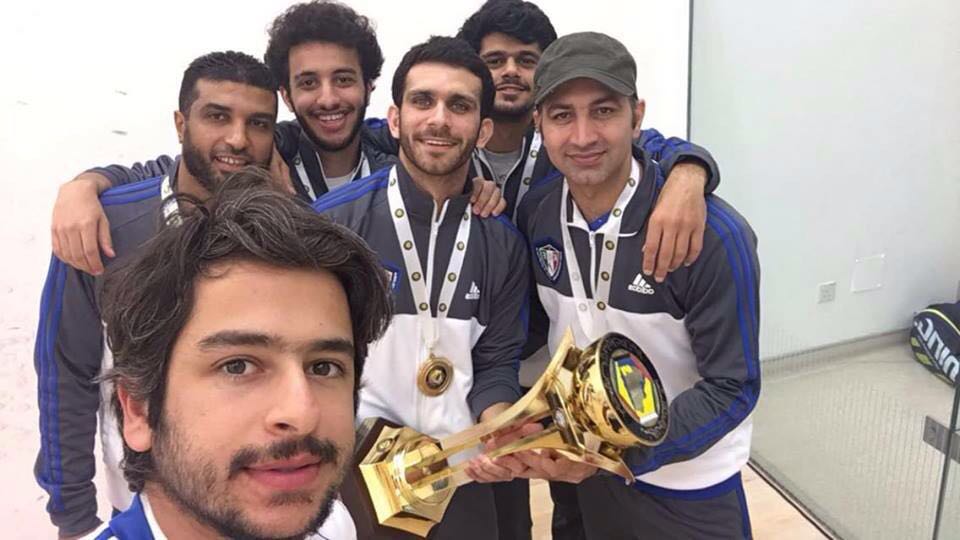 Kuwait wins first seven ranks in GCC Squash Tournament by Ussama Al-Khodor MANAMA, April 16 (KUNA), The Kuwaiti Squash team has won the first four of the ranks were won in the single category match while the other three were won in the general category match Head of the Kuwaiti Squash Union Hussein Maqseed told KUNA that the first four ranks in the single category were won by Abdullah Al-Mezyan, Ali Al-Rmizi, Sulaiman Al-Khamees and Falah Fayez.

the Three other ranks were won by bader Al-Husseini, the Gulf champion, Mohammad Yaqoub and Faisal Sarkhouh, becoming the first Kuwaiti achievement to be accomplished in such distinction during the past six years since the tournament had kicked off Maqseed said he dedicates this great victory achieved by the Kuwaiti team to his highness the Amir, His highness the Crown prince and prime Minister and head of the Kuwaiti public Authority for youth and Sport Sheikh fahd Jaber Al-Sabah and Sheikh Talal Fahd Al-Ahmad for their Continuous support.

Afghanistan ready to release Inzamam ‘if Pakistan need him’ 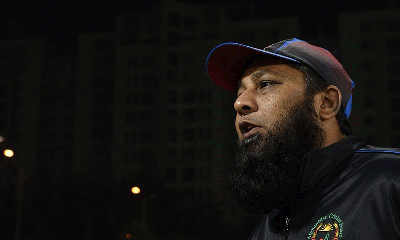 Afghanistan Cricket Board (ACB) chief Shafiq Stanikzai has put to rest all speculation regarding Inzamam-ul-Haq’s future as their national team coach by announcing that his board is ready to release him if he’s required by Pakistan.

The former batsman has been tipped to take charge as the Pakistan chief selector, however, there has been no indication from Inzamam himself.

"Today Shaharyar Khan called me and asked a favour to release Inzamam-ul-Haq as they are keen to hire him," Stanikzai said while talking to ESPNCricinfo.

Inzamam joined the Afghanistan team as head-coach for their tour to Zimbabwe in 2015.

The Multan-born cricketer got a contract extension after his team’s ODI and T20 series triumph against the full member Zimbabwe side.

Under Inzamam, Afghanistan recorded their famous win against West Indies at the recently concluded World T20.

The ACB chief they were willing to let go of their successful coach because Afghans were 'patriotic' people.

"Although he was in contract with us until December this year, we are patriotic people and if Pakistan needs Inzamam for their own country, we are ready to release him,” he said.

“We are looking at the contract right now with all the terms and conditions but we are not going to drag this and rather finish this on good and high note."

Before the Afghanistan job, Inzamam’s last coaching stint at the international level was as Pakistan’s batting consultant in 2012-13. 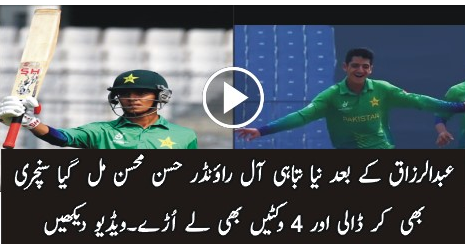 Hasan Mohsin is one of those names who have been raised in all Pakistan social media forums. His absence from those 5 names from the Under-19 category during the drafting for Pakistan cup has made Pakistan cricket fans angry.

Hasan was the best performer from Pakistan in the last Under -19 world cup. He batted well enough and also took wickets yet he was not taken by the PCB management who made the lists of players be taken in the five teams.

The real shame is that players who did not perform exceptionally well, but only have the influence have made it to the five teams.

Hasan Mohsin brilliance can be seen in this package in which he played a brilliant knock against Nepal followed by taking four wickets as well. He was awarded man of the match award in that game. in the Under-19 world cup, he scored 300 runs and took 11 wickets and hence it was a shame not to see him be listed in the Under-19 category today for Pakistan cup.

Hasan first batted as Pakistan went out to bat first. His first was an edgy one which went to the fine leg fence and after that, he middled everything that came his way. Hasan hit a series of fours and a couple of maximum ones.

He was absolutely perfect on both sides of the wickets. The way he placed himself on the crease to load those two sixes on the leg side showed how quickly he can read he line and length of the ball. In the bowling, he is a genuine swinger of the new ball. Hasan pitched the ball right near to the crease t generate maximum swing. This helped him take down 4 wickets as well.

Poor finishing results in 1-0 defeat for Pakistan against Malaysia 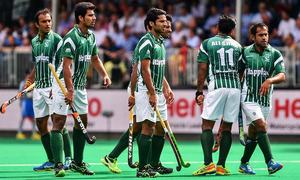 Pakistan suffered their fourth straight defeat at the Sultan Azlan Shah Cup as hosts Malaysia edged off to a 1-0 win over Mohammad Imran’s side on Wednesday.

Malaysia skipper Mohammad Razie Rahim converted a penalty corner on the third minute which proved enough for them.

Later their goalkeeper Hairi Abdul Rahman saved the day for them as Pakistan continuously launched attacks but lacked composure in front of the goal.

Pakistan’s last loss against Malaysia before Wednesday’s defeat came in 2013 at the World Hockey League semi-final.

A day earlier India handed Pakistan a 5-1 defeat and dent their prospects of a podium finish in the tournament.

For Pakistan, the opponents changed but the result was as damning as their previous two losses where they were outdone 4-0 and 5-3 by Australia and New Zealand respectively.

Pakistan are currently placed at the 6th spot on the table and with one more game to play against Japan, they need a dramatic turnaround to ensure a 3rd-4th place bronze medal playoff. 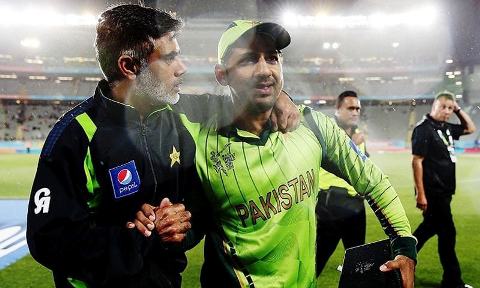 Afridi quit as captain after Pakistan lost three of its four group matches at the World Twenty20 tournament in India, but said he wanted to continue playing the shortest format of international cricket.

“I spoke to Sarfraz this morning and conveyed to him that he was our natural choice for this position,” PCB chairman Shaharyar Khan said in a statement Tuesday.

“His appointment is open-ended. I wish him good luck in his new role.”

Ahmed, 28, played in all the four World Twenty20 matches, but batted lower down the order throughout the tournament despite having a good strike rate of 120.24 in 21 Twenty20 internationals.

Ahmed led Quetta Gladiators in Pakistan's first professional domestic Twenty20 league in February before losing to the Misbah-ul-Haq-led Islamabad United in the final.

Pakistan is likely to play only three T20 internationals in the remainder of 2016, one against England and two against the world champion West Indies. Former Test captain Rashid Latif doesn't think that's enough to properly assess Ahmed's ability as captain.

“The decision to appoint Ahmed is no more than damage control of PCB,” Latif told The Associated Press.

“The cricket board is trying to put behind what happened at the World Twenty20 where we could win only one group match against Bangladesh.”

Latif said the PCB should also replace ODI captain Azhar Ali and “bring in Sarfraz” so that the wicketkeeper-batsman could get more experience as a skipper in the international arena.

“Making him captain for only Twenty20 is not enough,” Latif said.

Learnt a lot from Afridi, Misbah and Younis

After being appointed as the captain of the Pakistan T20 side, Sarfraz Ahmed thanked the skippers he played under since his international career kicked off in 2007.

The wicket-keeper played during the captaincy tenures of Shoaib Malik, Younis Khan, Shahid Afridi and Misbah-ul-Haq.

“I have learnt a lot from both Afridi and Misbah,” said Sarfraz while addressing reporters in Karachi on Tuesday.

“Younis used to field in the slips right beside me and has always helped me,” he added.

Accepting the challenges he is set to face amid the controversy surrounding Pakistan’s cricket setup, Sarfraz remained hopeful that the PCB will assist him.

“I’ll try to give my input to the board as Pakistan’s captain while at the same time i’ll also respect the policies of the board,” he said. 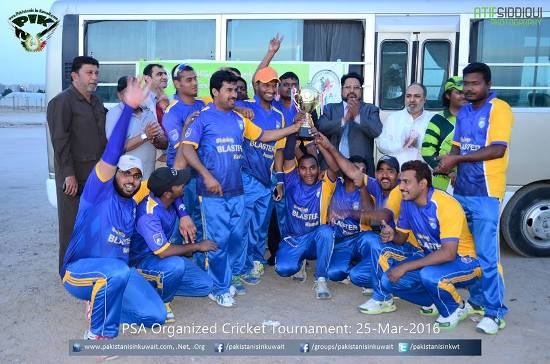 The tournament taken place in a ground of Jaleeb al shuaikh, both team played well, the winning team was shining... 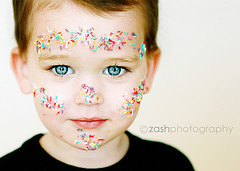