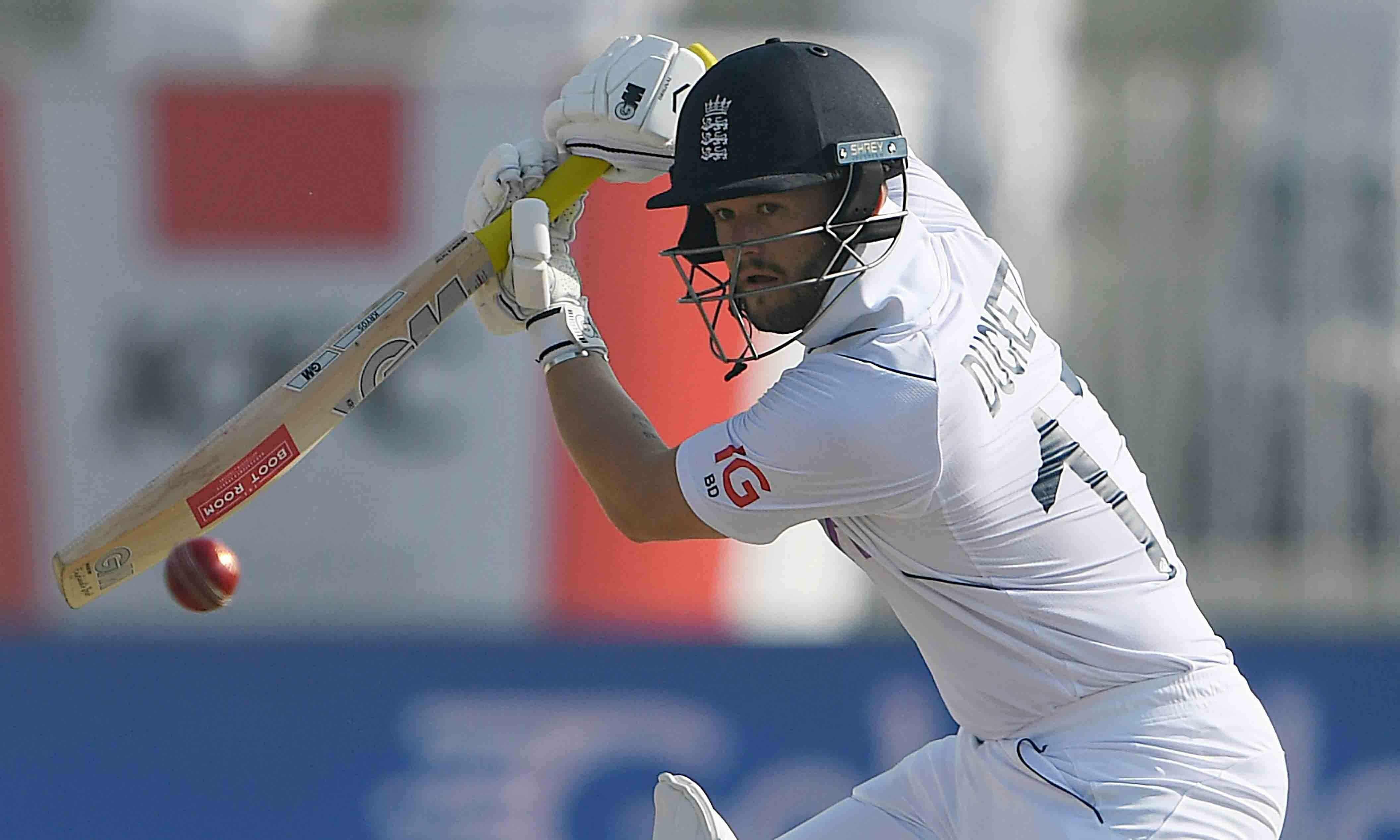 Openers Zak Crawley and Ben Duckett punished Pakistan on a batting-friendly pitch on Thursday as England raced to 174 without loss on the opening day of the first Test in Rawalpindi.
Crawley was unbeaten on 91 and Duckett 77 at lunch after England won a good toss and maintained their recent aggressive style, dubbed “Bazball” after the nickname of head coach Brendon McCullum.
Crawley showed his intent right from the start, hitting three boundaries off Pakistan fast bowler Naseem Shah’s first over of the match, and bringing up his half-century off just 38 balls.
Crawley could have become the first England batter to score a century before lunch on day one of a Test but was left nine short.
He has struck 17 boundaries so far.
Duckett, playing his first Test in six years, was equally aggressive with 11 fours in his second half-century.
England’s robust batting was the ideal start to the Test — its first in Pakistan for 17 years — after the start hung in the balance on Wednesday when several of the squad came down with a mystery virus.
Pakistan included pacers Haris Rauf and Mohammad Ali, spinner Zahid Mahmood, and batsman Saud Shakeel for their first Test, while England gave Liam Livingstone and Will Jacks their debuts.
First Test commences as per schedule Earlier, the Pakistan Cricket Board (PCB) announced that the match would be played as per the original schedule.
“The ECB (England Cricket Board) has informed the PCB that they are in a position to field an XI, and, as such, the first PAKvENG Test will commence as per schedule today (Thursday, 1 December) at the Rawalpindi Cricket Stadium,” the PCB said in an early morning tweet.
The commencement of the match today had become doubtful after several players in the England camp fell ill on Wednesday.
For today’s match, the touring side has made one change to their original playing 11, replacing Ben Foakes with Will Jacks, who makes his test debut along with all-rounder Liam Livingstone.
“We’ve had some illness going round but we were really excited to get started,” Stokes said after winning the toss. “It’s not been ideal obviously, to start our tour like this, but hopefully we’ll be fine.”
Pakistan have named four debutants — Saud Shakeel, Haris Rauf, Mohammad Ali and Zahid Mehmood — in their playing 11.
England and Pakistan will contest a three-Test series with the first match starting today (Dec 1-5), the second in Multan from Dec 9-13 and the third in Karachi from Dec 17-21.
Illness strikes England team BBC reported on Wednesday that about half of England’s playing squad of 16 was hit by an illness, with only five taking part in an optional training session around 14 members of the travelling party — including coaches and backup staff — advised to stay at the team hotel.
Joe Root, Zak Crawley, Harry Brook, Ollie Pope and Keaton Jennings were the players at training on Wednesday, while head coach Brendon McCullum was also in attendance. All of the squad had trained on Tuesday.
Following reports of England players falling sick, the PCB and England Cricket Board had announced that a final decision on whether to go ahead with the first Test as per schedule would be announced on Thursday morning.
In a joint statement, the PCB and ECB said they had discussed the “outbreak of viral infection” among the England team and “unanimously agreed to delay the decision on the commencement of the first Test […] until 07:30 Pakistan time tomorrow (Thursday)”. The statement said that the two boards made the decision based on “medical advice from the England doctors”.
England are on their first Test tour of Pakistan in 17 years, following their T20 side playing seven matches in the country two months ago, taking the series 4-3.
Problems with food and players becoming ill during the T20 series led to the decision to bring a chef, Omar Meziane, who also worked with the England men’s football team at the 2018 World Cup in Russia and at Euro 2020.
However, former England Test captain Joe Root dismissed on Wednesday the possibility of his team teammates falling ill during the ongoing tour due to food poisoning, saying “it is just I think one of those things that we, unfortunately, picked up as a group”.
“I don’t think it’s food poisoning or Covid or anything like that,” said Root as he responded to a query at a press talk in Rawalpindi.
Teams
Pakistan: Babar Azam (captain), Mohammad Rizwan, Imam-ul-Haq, Abdullah Shafique, Azhar Ali, Salman Ali Agha, Mohammad Ali, Haris Rauf, Saud Shakeel, Zahid Mahmood, Naseem Shah
England: Ben Stokes (captain), James Anderson, Joe Root, Harry Brook, Zak Crawley, Ben Duckett, Will Jacks, Jack Leach, Liam Livingstone, Ollie Pope, Ollie Robinson
Umpires: Joel Wilson (WIS) and Ahsan Raza (PAK)
TV umpire: Marais Erasmus (RSA)
Match referee: Andy Pycroft (ZIM)