Welcome to the Mind-Meld: Our Future of Brain-to-Brain Communication 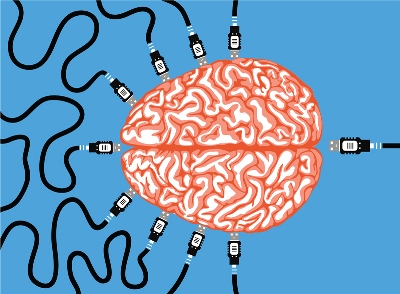 The first rat pressed a lever, anticipating the tasty reward it’d been trained to expect. An implant in the rat’s brain converted its neural activity into an electronic signal and beamed the impulse to the brain of the second rat, which leaped forward and pressed a lever in its own cage. But rat #2 had never been trained to press the lever. Its movement impulse came not from its own brain, but directly from the brain of rat #1 – despite the fact that the two were separated by thousands of miles.

What we have created, said lead researcher Miguel Nicolelis, is “a new central nervous system made of two brains.”

That advance happened in 2012, and other labs were quick to one-up Nicolelis and his team. In the summer of 2013, a team of Harvard University researchers engineered a brain-to-brain interface between a rat and a human, enabling the human to control the rat’s tail movements simply by willing them to happen.

Finally, in August 2013, University of Washington scientists Rajesh Rao and Andrea Stocco succeeded in making one leap everyone was waiting for: A human-to-human brain-to-brain interface. By strapping one person into a non-invasive EEG helmet, and strapping the second into a transcranial magnetic stimulation (TMS) helmet, the researchers mind-melded themselves – for the sake of science.

The experiment went like this: Rao and Stocco sat across campus from one another, watching the same video game. Rao, wearing an EEG helmet, was at the controls – but instead of using his hand to hit the spacebar to fire, he simply imagined moving his hand.

Every time he did this, with near-instantaneous speed, a computer converted Rao’s brain signals into a digital signal and beamed it to Stocco’s TMS helmet. That helmet converted the signal into a burst of magnetic stimulation delivered to the precise region of Stocco’s motor cortex that controlled his right hand. Stocco’s hand would then twitch involuntarily, tapping the spacebar and (sometimes) scoring a hit in the game.

What did this feel like? “The two of us had very different experiences,” Rao says. “For me, it was only after the action had occurred that I had the chance to reflect upon what had happened – that it was Stocco’s hand, stimulated by my brain signal, that had caused the action. That realization was both exciting and a bit eerie.”

Stocco, on the other hand, reports that he simply felt an involuntary muscle twitch, which caused his hand to move and hit the keyboard. There was no conscious “need” to flex the muscle, he says, since the entire sequence of events from stimulation to movement happened within just a few tens of milliseconds. And what’s more, Rao says, “I don’t think he can resist the movement once he’s received the stimulation, since it operates at the subconscious level.” Eerie indeed.

But even with this subconscious level of connectivity, the process wasn’t flawless or error-free. And in fact, the system’s flaws and errors reveal some interesting truths about how our brains process information.

The EEG device that Rao used to send outgoing signals is based on technology that dates back to 1875. Though today’s devices are far more precise than those nineteenth-century models, they still operate on the same basic principle: Electrodes distributed across a person’s scalp pick up patterns of electrical activity that oscillate at specific frequencies within that person’s brain. Because EEG electrodes sit on the surface of the scalp, they can’t pinpoint this activity to a specific three-dimensional point within the brain. But with a little calibration, they’re very handy for tracking large-scale brain phenomena such as mood swings, shifts in attention and movement impulses.

TMS is a more recent technology – and, because it works by disrupting activity deep within the brain, more controversial. Numerous researchers have reported that TMS triggered seizures in some of their patients – although most experts now agree that the risk of seizure is extremely low for subjects not already prone to epilepsy. Meanwhile, experimenters throughout the 1990s and 2000s have succeeded in using TMS to trigger involuntary movements, to temporarily increase working memory, and even to treat depression.

On top of all that, TMS is non-invasive – so when it Rao and Stocco set out to design their brain-to-brain interface, TMS stood out as the clear choice for the output end. “I realized that, in EEG and TMS, we had noninvasive technologies for both recording from and stimulating the human brain,” Rao says. “So I approached Andrea Stocco, who had just arrived at UW and was using TMS for his cognitive psychology experiments. Andrea and I got really excited about the idea, and we started brainstorming.”

One thing that quickly became clear was that Rao’s EEG wouldn’t always send a clear signal. “EEG signals are quite hard to use for controlling devices,” he explains, “because the signal is a weak, noisy, filtered version of the underlying brain activity.” Movements of the eyes, face or body – or even stray thoughts – can interfere with the signal. Such stellar concentration took months of practice for Rao.

“In the early sessions,” Rao says, “we had several false positives, where Andrea’s hand would hit the ‘Fire’ key even though that was not my intention.” But as the trials wore on, Rao learned to control his EEG output more precisely – until, in the final session, Rao and Stocco achieved close to 100 percent accuracy (in their signals, though not in the game itself). “The only miss after that,” Rao says, “happened when Andrea’s hand moved but didn’t hit the key with sufficient force to fire the cannon.” A small bug indeed, in light of the team’s overall ambition.

Perhaps the most exciting thing about this project – aside from the “mind-meld” aspect – is the fact that it’s built on technology that’s rapidly entering the consumer marketplace. Although TMS remains confined to medical facilities and laboratories, groups of indie engineers around the world are hard at work building their own TMS devices. Home EEG kits, meanwhile, are widely available from companies such as Emotiv and NeuroSky – that is, if you wouldn’t rather build your own from scratch.

And though Rao’s initial tests transmitted mere movements, future iterations could theoretically transmit perceptions, concepts, or emotions. Then we truly would be talking about a mind-meld – allowing two people, through technology, to communicate directly via their brains.

For as long as we humans have felt curious about the world around us, we’ve struggled to communicate our thoughts to others clearly and to understand them in turn; to “get inside their heads.” But it hasn’t been until the last couple years that each of us can put on a little plastic helmet and watch what’s happening inside our own brains – and the brains of our friends – right at home. What’s next but to truly get inside each others’ minds and see what we find there?

Technologies like these might seem to have the potential to make robots of us all – but they also hint at a future of empathy more direct and immediate than any we’ve experienced before.