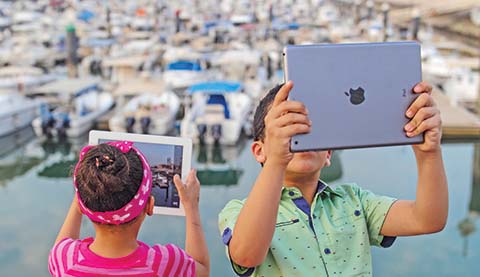 KUWAIT: Where is the Pokemon? Where is it hiding? How can I catch it? These are questions that are raised by users of the newly-launched Pokemon Go game which has taken the world by storm. The wildly popular mobile app, which is based on a 1990s Nintendo game, has created a global frenzy as players roam the real world looking for virtual cartoon monsters.

The smartphone game, which lets the user hunt virtual creatures called Pokemon in real life via an augmented reality platform, has already dominated download charts in the US and Australia and, drove a lot of young people crazy trying to hunt down these pocket monsters.

People capture the Pokemon and gain experience points to reach higher levels. They have an option of joining one of three teams in the game, which allow the player to conquer gyms that are placed randomly in the environment and compete with other teams.

Pokemon Go is a free-to-play location-based augmented reality mobile game which is developed by Niantic and was released in July 2016 for iOS and Android devices. There are about 9.55 million active users in the US only. Thus it has overcome the active users of twitter and is expected to outgrow every social media.

And if you insist on playing the game, there are many guidelines that you may need to consider while playing including making sure you are wearing appropriate footwear, sneakers or walking shoes that are ideal, ditch the cotton socks as cotton absorbs moisture and get sun protection.

Among the most important tips while using the smart game is to use sunglasses to protect your eyes from UV rays. While the Pokemon players are out hunting for the creatures, they are advised to keep drinking water, particularly during summer, as it is easy to get dehydrated, doing blister patrol, reapplying sunscreen and remaining aware of the surroundings.

No go
In Kuwait, the country has said ‘no’ to Pokemon Go in certain places. The Interior Ministry issued a statement warning users of the smash mobile phone application from taking pictures of any vital government, military or security location. It also warned users not to chase pocket monsters at mosques, shopping centers, malls and oil installations. Interior Ministry’s Undersecretary Lt Gen Suleiman Al-Fahad has warned that there will be no excuses for anyone claiming ignorance of the law.

He added that games like Pokemon Go may cause harm to its users in particular and society in general. He pointed out that users of the app might be in danger of potential road accidents if they use the app while driving or crossing roads.

Media Professor at Kuwait University Dr Khaled Al-Qahs said while commenting on the new trend from a media perspective that this game resembles other games that emerge every now and then, expecting the heavy demand on it would diminish with time.

He added that the game has been exploited for a commercial reason and has also conquered the virtual world, saying that the game would have never been given such popularity if the social media outlets did not constitute as an incubator for it.

From a social perspective, Kuwait University’s Sociology Professor Dr Saud Abdulaziz Al-Ghanem argued that once the Pokemon game user starts playing the game, he or she separates from his or her real world and indulges into the virtual world. “He starts running after a picture that only appears on his or her mobile screen, thus, becoming unable to take decisive decisions or actions because of his or her indulgence into the virtual world of the Pokemon,” he said.

Social isolation
Asked about the social dangers that may arise as a result of the game, Dr Saud pointed out that the game users may suffer social isolation for being attached to the game rather than the real world and for searching for virtual creatures which vary in shape and colors, thus, forcing the game users to escape the real world and indulge into the virtual world instead.

However, with the temperature in Kuwait exceeding 50 C degrees in the shade, will the game still be attractive and fascinating to its fans? Young people are seen roaming the streets, mosques, malls and at the sea searching for the little creatures, a matter that can cause unwanted harms.

Though Pokemon Go has not officially come to nations in the Arabian Gulf, many have downloaded the app. Authorities in the United Arab Emirates also have warned users to be careful while chasing digital critters in the augmented reality game.

The game requires the phone to transmit its location via GPS and uses its camera, a matter that prompted the UAE’s Telecommunications Regulatory Authority to warn that the game violates privacy and could lead ‘criminals’ to spread viruses.

Lastly, the Pokemon Go game has really turned the virtual world upside down with millions of people around the world becoming addicted to this game, whereas there are thousands of virtual games which have not got this popularity. – KUNA