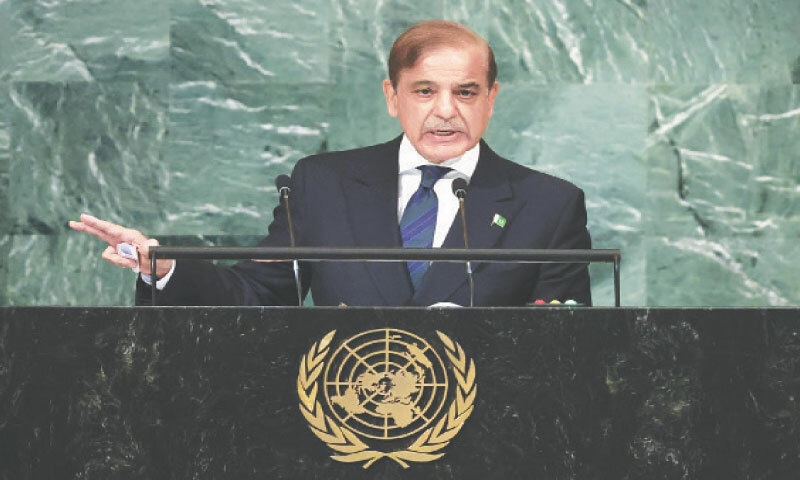 UNITED NATIONS: Prime Minister Shehbaz Sharif made a passionate appeal to the world on Friday to undo the ‘climate injustice’ done to countries like Pakistan that make little contribution to global warming and yet face its worst consequences.
In his debut speech at the UN General Assembly, the prime minister also offered an olive branch to India, saying peace in the neighbourhood was necessary for progress and stability in the region.
“Why are my people paying the price of such high global warming through no fault of their own?” Mr Sharif asked.
“Nature has unleashed her fury on Pakistan without looking at our carbon footprint, which is next to nothing. Our actions did not contribute to this.”
Mr Sharif also talked about regional issues, like the Kashmir dispute and Afghanistan, but he remained focused on the sufferings caused by this year’s unprecedented rains and floods.
“As I stand here today to tell the story of my country, Pakistan, my heart and mind have not been able to leave home. No words can describe the shock we are living through or how the face of the country lies transformed,” he said.
Offers olive branch to India, says peace in neighbourhood necessary for progress, stability; makes impassioned plea for assistance
He said he came to the UN to “explain first hand” the scale and magnitude of this climate catastrophe that has pushed one-third of the country under water in a super storm that no one has seen in living memory.
“For 40 days and 40 nights a flood of biblical proportions poured down on us, smashing centuries of weather records, challenging everything we knew about disaster, and how to manage it,” the prime minister said.
“Even today, huge swathes of the country are still under water, submerged in an ocean of human suffering. In this ground zero of climate change, 33 million people, including women and children, are now at high risk from health hazards, with 650,000 women giving birth in makeshift tarpaulins.”
The prime minister said Pakistan had never seen a more stark and devastating example of the impact of Global Warming. “Life in Pakistan has changed forever.
People in Pakistan ask why, why has this happened to them? When global warming rips apart whole families and an entire country at this ferocious speed, it is time to ask why, and time to ask not what can be done but what MUST be done,” said Mr Sharif while explaining how this calamity had affected hearts and minds in Pakistan.
“The undeniable and inconvenient truth is that this calamity has not been triggered by anything we have done,” he explained. “Our glaciers are melting fast, our forests are burning, and our heatwaves have crossed 53 degrees Celsius, making us the hottest place on the planet.”
The prime minister explained that this year’s deluge was not a solitary incident. “Now, we live through an unprecedented monster monsoon. It is literally a monsoon on steroids, as the UN secretary general described it most befittingly. One thing is very clear: what happened in Pakistan will not stay in Pakistan,” he warned.
Referring to another recent statement by the UN secretary general, Mr Sharif said that hotspots like Pakistan fall in the list of 10 most climate-vulnerable countries, but emit less than one per cent of the greenhouse gasses that are burning the planet.
“It is, therefore, entirely reasonable to expect some approximation of justice for this loss and damage, not to mention building back better with resilience.”
Thanking the UN secretary general for visiting the flood-affected areas and those nations which sent help and their representatives to Pakistan, the prime minister said: “Clearly, the time for talk about actions has passed.”
The prime minister also expressed the fear that once flood subsides, people may forget the victims. “So my real worry is about the next stage of this challenge. When the cameras leave, and the story just shifts away to conflicts like the Ukraine, my question is, will we be left alone, to cope with a crisis we did not create?”
Mr Sharif said Pakistan’s urgent priority was to ensure rapid economic growth and lift millions out of destitution and hunger. “We look for peace with all our neighbours, including India. Sustainable peace and stability in South Asia, however, remains contingent upon a just and lasting solution of the Jammu and Kashmir dispute,” he said, urging India to end this longstanding dispute by giving the inalienable right of self-determination to the people of held Kashmir.
The prime minister said Pakistan would also like to see an Afghanistan which was at peace with itself and the world, and “which respects and nurtures all its citizens, without regard to gender, ethnicity and religion”.