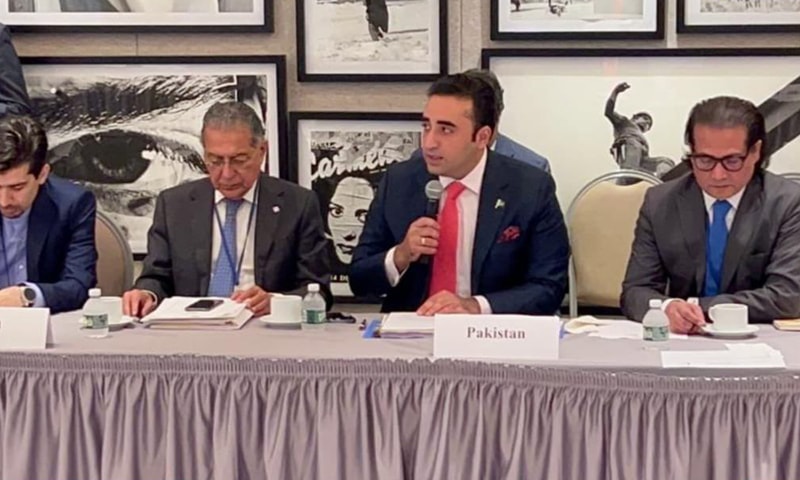 UNITED NATIONS: The high-level debate at the 77th session of the UN Gen­eral Assembly (UNGA) began in New York on Monday with Pakistan telling the world how climate change, pandemics and conflicts were reversing progress and widening inequalities around the globe.
Foreign Minister Bilawal Bhutto-Zardari and Minister of State for Foreign Affairs Hina Rabbani Khar represented Pakistan at the inaugural session of the high-level debate ahead of Prime Minis­ter Shehbaz Sharif’s arrival in New York on Monday evening.
The PM will address the General Assembly on Sept 23.
Hina Rabbani Khar was the first to speak — at the Transforming Education Summit 2022 — where she read a statement on behalf of the Group of 77 and China, as Pakistan currently heads this key UN lobby.
“Millions are held back from learning and living a life of dignity and empowerment,” she told the world leaders attending the summit.
“Education is at a crossroads. Covid-19, conflict, poverty, climate change, natural disasters and gender inequality are reversing progress and widening inequalities.”
The foreign minister, however, represented Pakistan at the OIC Contact Group at the UN, which met on Monday to consider “an alarming rise” in Islamophobia in the West.
“What is most worrisome is that Islamophobia continues to find strong resonance in political spheres in Europe,” he warned. “This is leading to the institutionalisation of Islamophobia through new legislations and policies.”
“Today, one of the worst manifestations of such Islamophobia is in Hindutva-inspired India,” Mr Bhutto-Zardari said. “Driven by the ideology of hate against Muslims, the ruling BJP-RSS regime is executing its century-old plan to obliterate India’s Islamic legacy.”
Last year, the UN General Assembly adopted a landmark resolution, introduced by Pakistan on behalf of the OIC, designating March 15 as the International Day to Combat Islamophobia.
Ms Khar told the session on education that even before the Covid-19 pandemic, over half of the world’s children and youth were either out of school or in school and not learning. During the pandemic, more than 1.6 billion children and youth – nearly the entire world’s population – had their education disrupted, she added.
“Unfortunately, post-pandemic conditions have worsened these inequalities in many geographical regions,” she said.
The foreign minister also met Chinese Foreign Minister Wang Yi on the sidelines of the 77th UNGA Session in New York on Monday.
This was their fourth meeting since the foreign minister assumed office in April 2022.
During the meeting, the two sides had a comprehensive exchange of views on the entire spectrum of bilateral partnership and multilateral cooperation, including at the United Nations.
Pakistan has also arranged a week-long (Sept 19-25) exhibition at the secretariat lobby of the UN headquarters in New York to share the devastation caused by recent floods with the rest of the world.
The exhibition – “A Climate Carnage” – displays the sights of the disasters that struck Pakistan this summer “as a vivid manifestation of the losses caused by climate change”, said a statement issued by the country’s permanent mission at the UN.