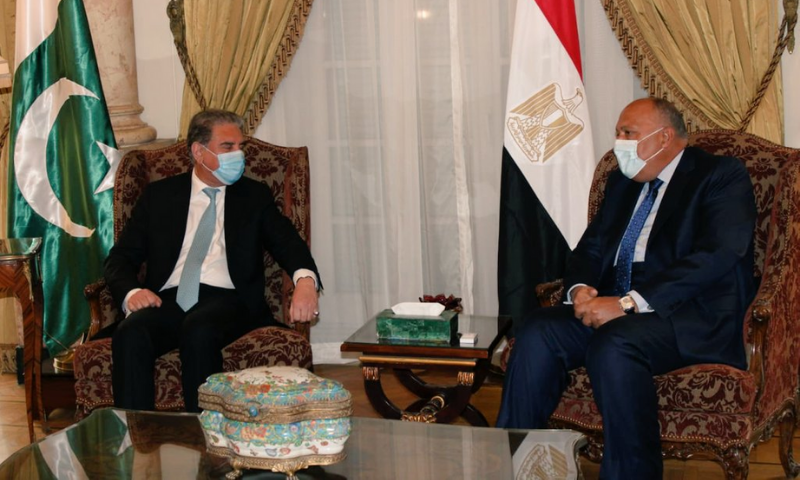 Foreign Minister Shah Mahmood Qureshi and his Egyptian counterpart, Sameh Hassan Shoukry, on Wednesday agreed to strengthen ties between Pakistan and Egypt through increased cooperation in trade and other sectors, APP reported.

Both foreign ministers discussed matters of mutual interest in a meeting in Cairo, where Qureshi had arrived on Tuesday on a two-day visit.

Qureshi told Shoukry that Pakistan considered Egypt an important country of the Arab world, adding that both countries enjoyed "historic religious, cultural and brotherly relations", according to the APP.

He also informed Shoukry of Prime Minister Imran Khan's policy to enrich economic relations with African countries. Before leaving for Cairo on a two-day visit on Tuesday, Qureshi had said that Egypt was known as the "Africa's gateway".

During Wednesday's meeting, Shoukry also lauded Pakistan's efforts for peace in Afghanistan, while Qureshi told him about India's hostile activities against Pakistan which the latter said were a "danger for peace and stability of the region".

Qureshi thanked Shoukry for the warm welcome he received in Egypt. The foreign minister also extended an invitation to Shoukry to visit Pakistan, which the latter accepted.

In a tweet later, Qureshi said that it was a "pleasure" to meet Shoukry and added: "[I] look forward to hosting FM Shoukry in Pakistan".

"The relationship between Pakistan and Egypt is one of mutual trust and cooperation," Qureshi said in his tweet. "FM Shoukry and I discussed ways to grow our ties, with greater people to people contact, trade and sustained engagement."

The foreign minister also met members of the Egyptian business community during his trip.