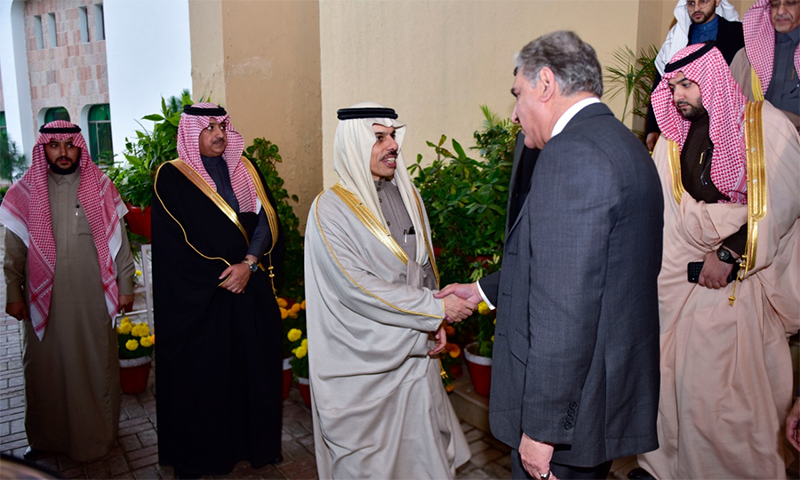 The Saudi minister made the call amid growing resentment in Islamabad over Riyadh’s reluctance to back a meeting of foreign ministers of Organisation of Islamic Cooperation (OIC) member countries for developing a joint stand on the annexation of India-held Jammu and Kashmir by India and its subsequent highhanded tactics, including a sweeping security lockdown and a communication blockade in the Valley, to prevent agitation against the move. The lockdown, which is now in its 188th day, has created a humanitarian crisis in India-held Kashmir.

Dawn had earlier reported Saudi Arabia’s unwillingness to support the Pakistani request for meeting of the OIC Council of Foreign Ministers (CFM) on Kashmir. Pakistan has been pushing for the meeting since August 2019 when India had annexed the occupied region of Jammu and Kashmir.

Riyadh has been hesitant to give its nod for the proposed CFM and instead floated alternate proposals including the holding of a parliamentary/speakers’ conference or a joint meeting on Palestine and Kashmir. Support from the Kingdom that along with its other Arab allies dominates the OIC is considered crucial for any move at the body comprising 57 Muslim countries.

Islamabad, however, remained firm about convening the session on Kashmir and reiterated its demand in engagements with Riyadh at various levels.

A diplomatic source revealed that Pakistan government had at one stage cautioned Saudi leaders that lack of unequivocal support for Kashmir from Riyadh could affect public perceptions in Pakistan.

During his recent visit to Malaysia, Prime Minister Imran Khan had voiced his frustration over the OIC’s failure to support the Kashmir cause. PM Khan’s latest position on Kuala Lumpur Summit held last December also worried the Saudis.

The prime minister, who initially accepted the Malaysian invitation for the KL Summit, later reversed his decision over Saudi reservations. However, during his recent visit to Kuala Lumpur six weeks after the summit, Mr Khan regretted his earlier decision and showed a change of mind by promising to attend the next edition of the KL Summit. While speaking at a press conference alongside his host Prime Minister Dr Mahathir Mohamed, Mr Khan said: “I want to say how sad I was that I couldn’t attend the conference in Kuala Lumpur in the middle of December. Unfortunately, our friends, who are very close to Pakistan as well, felt that somehow the conference was going to divide the Ummah. It was clearly a misconception because that was not the purpose of the conference as was evident when the conference took place.”

FM Faisal’s call came ahead of the OIC senior officials’ meeting in Jeddah, starting from Sunday (Feb 9). The officials meeting will prepare the agenda for the next regular CFM being held in Niger in the first week of April. It is expected that the usual resolutions on Kashmir would be approved for adoption by the foreign ministers at the next CFM.

The two foreign ministers, according to the FO statement, during their telephonic conversation also exchanged views on regional developments and agreed to remain in close contact.

“The two Foreign Ministers reaffirmed the strategic importance of the Pakistan-Saudi Arabia relationship and reiterated the shared resolve to deepen bilateral cooperation in diverse fields,” the statement further said.