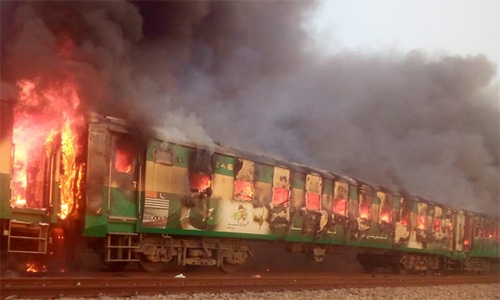 The death toll from a fire in three bogies of a Tezgam train near Liaqatpur city jumped to 62, while many remain under critical condition, Rahim Yar Khan district government said on Thursday.

Women and children are also amongst the victims — none of whom have been identified yet. The dead and injured are being shifted to DHQ Hospital in Liaqatpur. Some of the injured have also been shifted to Bahawal Victoria Hospital in Bahawalpur due to their critical condition.

The train was bound from Karachi to Rawalpindi, Radio Pak reported. The fire was caused by a cylinder blast that occurred in the morning when passengers were preparing their breakfast, Railways Minister Sheikh Rashid said and added that they belonged to a tableeghi jamaat who were headed towards Raiwand. Many people saved their lives by jumping off the train, the minister said.

Nabila Aslam, a Railways official, told DawnNewsTV that the passengers must have "hidden the gas cylinder in their clothes" while boarding the train, as carrying one was strictly against the rules.

Rescue 1122 teams have extinguished the fire and are now carrying out a cooling and search operation under the supervision of Ahmed. Army troops including doctors and paramedics were also dispatched to assist rescue teams in the operation, a statement by the Inter-Services Public Relations said.

An Army helicopter was also dispatched from Multan in order to rescue the injured, the ISPR statement added further.

Prime Minister Imran Khan extended his condolences to the families of the victims and directed authorities to provide the best medical treatment to the injured, Radio Pak said.

Human Rights Minister Shireen Mazari extended "prayers and condolences" to families of the victims of the "terrible Tezgam train tragedy".

In a tweet, Mazari regretted that the "tragedy [...] could have been avoided but ever since I can recall while travelling by train no baggage check or restrictions enforced. Tragic."

An inquiry has been launched in the incident, APP quoted a senior official of the Railways Ministry as saying.

The incident comes over three months after a train collision in Sadiqabad between passenger train Akbar Express and a freight train killed more than 20 and injured more than 80 people.

In June, three people were killed when a passenger train, the Jinnah Express, hit a freight car near Hyderabad. At the time, Rashid had accepted responsibility and sought an apology from the nation.

"I accept responsibility for this accident and seek an apology from the nation. Such a portfolio is not important for me as I have become federal minister for the eighth time. And I will resign whenever I feel burden on my conscience," the minister had said at the time. 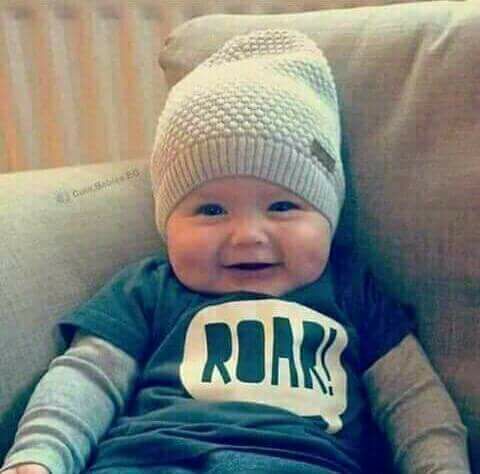