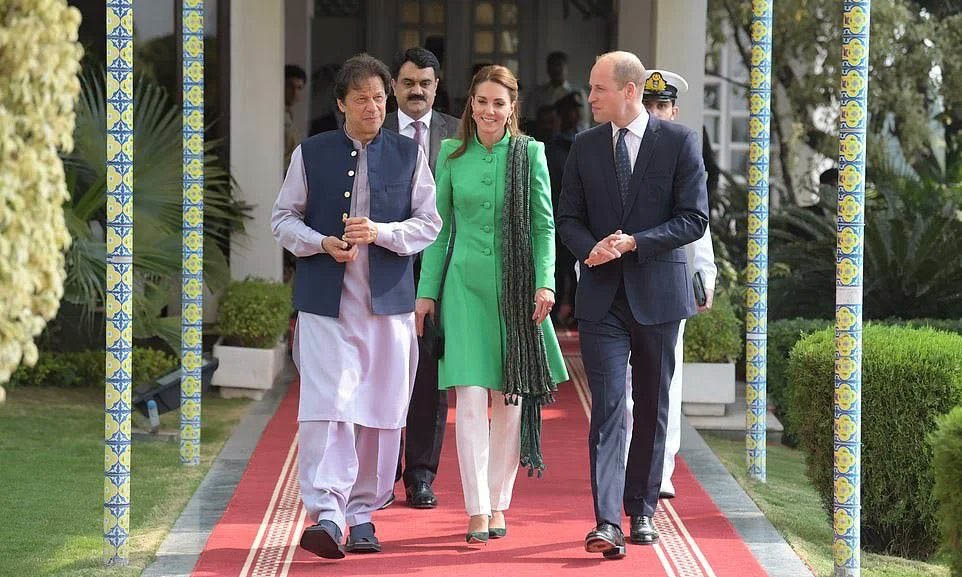 They were received by the premier at the Prime Minister House, where a lunch is being hosted for the guests.

William's late mother, Diana, was a friend of the prime minister and visited Pakistan twice — 1996 and 1997 — to help raise awareness and funds for the Shaukat Khanum Memorial Cancer Hospital.

Prior to meeting the prime minister, the couple was welcomed by President Arif Alvi and his wife Samina Arif at Aiwan-i-Sadr.

Middleton, who earlier donned a royal blue kurta, changed into a green and white attire for the formal receptions.

The president commended the visiting dignitaries for their endeavors to raise awareness about mental health, climate change, and poverty alleviation, said a press release by the president's secretariat.

The Duke of Cambridge thanked the president for the warm welcome and hospitality extended to him and his entourage. The royal couple appreciated the initiatives undertaken by Pakistan's government to combat climate change and to alleviate poverty, added the statement.

This is the first visit of the duke and duchess to Pakistan, during which they aim to "meet as many Pakistanis as possible and build a lasting friendship with the people of the country".

The couple kicked off their engagements on the second day of their five-day visit to Pakistan with a visit to the Government Girls College on Tuesday morning, where they interacted with the staff and students and visited classrooms.

Clips shared by British media show one of the schoolgirls telling William that "they were fans" of his mother, Diana, Princess of Wales. "I was a big fan of my mother too," he replied with a smile.

After their visit to the school, they arrived at Trail 5, Margalla to attend an event regarding environmental protection. Strict security arrangements were made prior to their arrival.

A visit to the Pakistan National Monument is also part of the royal couple's agenda.

The Duke and Duchess of Cambridge arrived in Islamabad on Monday night and were received by Foreign Minister Shah Mahmood Qureshi and his wife Mehriene Qureshi at the Nur Khan Airbase. British High Commissioner in Pakistan Thomas Drew was also present on the occasion.

The five-day visit, which will end on October 18, has been organised at the request of the United Kingdom’s (UK) Foreign and Commonwealth Office.

According to a handout from Kensington Palace, the British royal couple will visit Islamabad, Lahore, Gilgit-Baltistan and rugged border regions to the west. The visit will span over 1,000 kilometres, and will take in Pakistan’s rich culture, its diverse communities, and its beautiful landscapes, the handout said.