The hyperbole of Pak-US trade 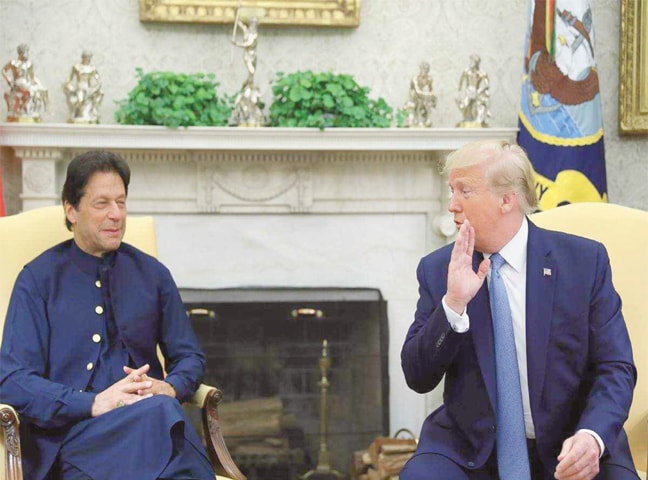 Amidst the spectacle of Khan-Trump camaraderie, one of the bones tossed around was the increase in bilateral trade.

“I see great trade with Pakistan. And I’m not talking about a little bit more. I’m talking about 10 and even 20 times what we’re doing right now,” said US President Donald Trump.

Those are big numbers to throw around. The United States is Pakistan’s top market accounting for 16 per cent of its exports in 2018. An increase of this magnitude would mean a jump of over $67 billion in our bilateral relationship, with exports increasing by $38bn.

Clearly, the words are hyperbolic. Trump pooh-poohed a 20pc increase in trade but even that would indicate a nearly $1bn increase in exports. Textiles dominate and make up over 80pc of exports to the United States.

Assuming an ideal scenario in which Pakistan and the United States are best buddies, what would it take for Pakistan’s textile sector to make such a leap?

Amongst the many hurdles are the age-old woes of ease and cost of doing business that the textile sector has been lamenting since time immemorial. Then there is the current macroeconomic environment that is scaring off investors. And last but not least, the shortcomings of the textile sector that render it uncompetitive even if all other variables are in place.

After the 2012 Baldia fire tragedy at a garment factory, Walt Disney sent a letter expressing concern about the safety standards in the industry. The upshot of it was that Pakistan was removed from the list of permitted sourcing countries since it scored 18 points on the World Governance Index (WGI) when the minimum qualifying requirement was 25 points.

Better Work is a programme run by the International Labour Organisation and the International Finance Corporation. Its objective is to improve working conditions in the garment industry and make the sector more competitive by bringing together diverse groups such as governments, global brands, factory owners, unions and workers.

However, when Pakistan approached Better Work, it was informed that it “currently had more candidate countries that it could accommodate”. This was back in 2013. An arduous process followed requiring feasibility studies and assessments.

Fast-forward to 2019, the process is finally bearing fruit and Pakistan is expected to be part of this programme this year, which will be funded by the Export Development Fund.

While there may not be a direct link between the Better Work programme and Pakistan’s exports, it increases arsenal in Pakistan’s ammunition, says Majyd Aziz, president of the Employers’ Federation of Pakistan.

The Disney ban did not materially impact Pakistan’s exports, which have averaged around $3.6bn over the last 10 years.

However, it did highlight concerns regarding compliance.

“We can’t take the risk to not be compliant, we will be sued!” Soorty Enterprises Managing Director Shahid Soorty says, contending they have to be ready for spot checks at all times. These words represent the generally held views of different big manufacturers/exporters representing various associations.

While the major players may be compliant with international standards, they do tend to outsource to Cut-Make-Trim (CMT) units, said a source in the sector.

CMT units are the most basic form of operations in the ready-made garment industry. Input and product specifications are provided by the retailer while garments are manufactured and packaged by CMT units.

While the big boys fulfil the requirements, the CMTs fly below the radar and adhere to far lax standards. Incidents like the Baldia factory fire draw attention to non-compliance in the sector and paint a negative picture, which costs the textile sector across the board.

A lot of pens have dwelled on the high cost of doing business in Pakistan, especially in the current macroeconomic environment, but it bears repeating.

“About 90pc of garment exporters are small and medium enterprises (SMEs),” says Shaikh Muhammad Shafiq of the Pakistan Readymade Garment Manufacturers and Exporters Association. “With the withdrawal of zero-rating and a liquidity crunch, they will have to leave the market.”

This sentiment was echoed by various associations of textile exporters that asserted that the medium and smaller players were being forced to exit.

“Bangladesh can supply five-pocket jeans at $7-7.5 while Pakistan quotes $8-8.5,” said Mirza Ikhtiar Baig, a denim exporter. “This is why the bulk of orders go to countries like Vietnam, Cambodia and Bangladesh whereas Pakistan gets only spillover orders.”

“We have a factory in Bangladesh because of its lower cost of production. We get a 7pc discount there by default,” said Mr Soorty. In order of importance, he stated the ease of doing business, wages, labour laws, energy and other facilities were the reasons why Soorty Enterprises opts to export from Bangladesh while also having operations in Pakistan.

Since the majority of Pakistan’s exporters are SMEs, they do not have the critical mass to enjoy economies of scale. At most, they manage to get a stall in international exhibitions but lack marketing skills. Nor are they savvy enough to bid online for tenders with competing nations.

The sector’s concerns and complaints notwithstanding, demand-side trends have changed over the last decade, which makes a dramatic increase in textile exports to the United States unfeasible in the short and medium terms.

Oil-based synthetic fibres have a lion’s share at 60pc of the world market while cotton’s share is about 25pc. Technological advances in synthetic fibres, better moisture absorbency and a lower cost of raw material make manmade fibre textiles a preferred option compared to Pakistan’s cotton-dominated exports.

There is a lack of research and development within the sector, a factor highlighted by the State Bank of Pakistan’s 2016-17 annual report that flagged a decrease in textile exports to the United States. The report stated that textile players are still “excessively focused on cotton-based textile and apparel products” when the market is moving elsewhere.

This situation is exacerbated by the absence of a strong domestic polyester industry with demand for manmade fibres largely met by imports.

The share of cotton products in the US textile imports decreased from 40pc in 2010 to 29.7pc in 2017, indicating a changing preference of consumers in foreign markets. Pakistan’s share in the textile and apparel imports of the United States in 2016 was 3pc, as per the US Office of Textile and Apparel. It was 5pc for cotton-based products. The manmade fibre imports by the United States in 2016 were $52bn, of which Pakistan’s insignificant exports were $200 million.

Yet the sector opts to fixate on its cost of doing business woes without taking into account the evolving trends that have come after years of high cotton prices and improving synthetic technology. The polo shirts and assorted apparel manufactured nearly two decades back are still the bread and butter of the garment industry.

Admittedly, the macroeconomic and business environments are key variables for Pakistan’s textile export competitiveness. However, till firms move out of their comfort zones and take it upon themselves to improve operations and product offerings, any increase in exports will remain marginal at best.