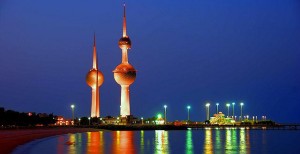 We need to renew our pledge today that we would come up to the expectations of our great Quaid- H.E Syed Abrar Hussain

KUWAIT: The Ambassador of the Islamic Republic of Pakistan to Kuwait H.E Syed Abrar Hussain hoisted the National Flag with National anthem playing in the background in a simple but impressive ceremony that was attended by representatives of large Pakistani community residing in Kuwait and the officials of the Embassy. Being an Ambassador it was his first independence day Celebration Ceremony in Kuwait.
“We need to renew our pledge today that we would come up to the expectations of our great Quaid and make Pakistan a strong and better country” stated by the Ambassador of Pakistan Syed Abrar Hussain in his interview to Voice of Overseas Pakistanis in Kuwait Channel & PIK team after the flag hoisting ceremony to mark the 67th Independence Day of Pakistan, KTV-2 also captured this beautiful event today.
Later on, messages of the President of Pakistan Mr. Asif Ali Zardari and the Prime Minister Muhammad Nawaz Sharif were read to the audience. In his message the president said that 14th August marked the successful culmination of a long and arduous struggle against heavy odds by Muslims of the sub-continent under the inspiring leadership of Quaid-i-Azam Mohammad Ali Jinnah. The Quaid envisioned Pakistan as a homeland for the Muslims of South Asia where democracy, constitutionalism and rule of law would reign supreme. Let us on this day join hands in upholding the principles for which Pakistan was created.
The Prime Minister in his message said that Pakistan came into being as a result of democratic, political and constitutional struggle. It is in democracy and representative rule that Pakistan’s future lies. Pakistan now has a functioning democracy, independent judiciary, and strong parliament. Similarly, robust media, active civil society and rising middle class are the manifestation of vibrant Pakistan. Democratic Pakistan enjoys respect and leverage in the comity of nations.
Addressing the participants of the ceremony, the Ambassador congratulated the Pakistani community residing in Kuwait on this auspicious occasion. He said that we are celebrating our 67th Independence Day at a time when Pakistan is confronted with many challenges as well as opportunities. The resilient Pakistani nation has emerged victorious in the face of such challenges and Insha’ Allah it will be no different this time around as well.
The Ambassador noted that the current year also marked a new turn in Pakistan-Kuwait relations whereby the visits of the President and the Prime Minister of Pakistan have helped in further cementing the bilateral relations between the two brotherly nations. He also said that the bonds of friendship and brotherhood have been further strengthened.
The Ambassador appreciated the role played by the Pakistani community in the development of both Pakistan and Kuwait. He said that they are our dearest asset and expressed the hope that they will continue to promote a better image of Pakistan through their sense of commitment and hard work.

Warning: No images in specified directory. Please check the directory!

KUWAIT CITY: A Bedoun youth and woman were arrested in Shaab area in possession of narcotic pills, sachets of heroin, a number of mobile phones and a large sum of money. According to security sources, Hawally securitymen were patrolling Shaab area when they stopped a vehicle with two occupants for checking. Sensing the nervousness of the driver, securitymen checked the vehicle and found the illicit items. The driver and his female passenger were arrested and referred to the Directorate General for Drug Control for necessary legal action against them.

Meanwhile, Hawally securitymen were patrolling Salmiya area when they noticed a man committing a traffic violation with his vehicle. They stopped him and checked his details to discover he is a Kuwaiti citizen. However, they noticed his disoriented state while he was pulling out his wallet from his pocket and saw some sachets fall out. They checked the sachets to discover they contained drugs. While they were checking the sachets, they noticed the suspect pulling out some sachets from his other pocket and throwing it away. They checked those sachets as well and discovered they contained drugs.

While securitymen were arresting the suspect, the latter started insulting and attacking them. They requested for backup support and a patrol team arrived after which they managed to arrest the citizen. They checked his vehicle and found a bag containing KD 5,300. They referred him with the drugs and cash to the concerned authorities for necessary legal action against him.

KUWAIT: The four-day Eid holidays are over and it’s back to work for everyone in Kuwait. Business was generally upbeat and the city’s restaurants were packed with customers during the Eid holidays. Kuwait Times visited various business establishments in Kuwait and asked about their general business assessment during Ramadan and the recent Eid holidays. While some multi-national business establishments are taking advantage of slow business during Ramadan, some small eateries have no reason to celebrate though.

Pastor Gil Bantugan, CPA and business consultant in a private firm in Kuwait City said all the business sectors during Ramadan are usually down but go up during Eid. “That is my personal opinion and I believe it’s the general perception throughout the Arab world during Ramadan and Eid,” he added. Restaurants and fashion sectors may be two affected businesses but are also two sectors reaping the best returns by the end of Ramadan. “They are perceived to be struggling businesses for obvious reasons. They can’t stay open during daytime and by night-time when they open, people would have eaten by then,” Bantugan said.

“The fashion business is also included, again for the simple reason that even though they are open during daytime, people are very conscious about avoiding a lavish lifestyle and hence shop less”. But these two sectors make up for the lost money during Eid as their sales are up post Ramadan. “Restaurants are the only place for entertainment in Kuwait so, they get the bigger slice of pie every Eid. Just imagine with so many restaurants we have in Kuwait, they were all packed with families and some of them have to wait in the queue just to get a table,” a restaurant manager opined.

Some hotels and casual dining restaurant staff usually get their annual vacation during Ramadan. “I was asked to stop working during the whole month of Ramadan in anticipation of a larger number of customers during Eid,” said Alex, a restaurant manager. The situation is the same in other businesses as they predicted slow business throughout Ramadan. “Now I am back and as expected, the last three days were the busiest days of my life,” a sales representative told this reporter.

In the fashion industry, business peaked just before the end of Ramadan. “It’s a tradition in the Arab world to wear something new during Eid. So the fashion industry sales are normally up even before the end of Ramadan,” said the owner of a fashion store in Salmiya. Sales in some supermarkets, especially in the food business, had also increased as home deliveries and catering businesses went up considerably.

While cosmetics and beauty-related business products were down during Ramadan, however, during the four-day Eid, she registered record high sales. “I think many want to be beautiful and treat themselves to spa treatments during Eid, so our business really steps up during Eid,” Fatima, a beauty salon expert mentioned.

KUWAIT: Coastguards managed to apprehend 13 people on a boat that snuck its way into territorial waters during extensive campaigns carried out during the Eid Al-Fitr holidays. The boat was spotted 13 miles away from the Kubbar island approaching from southeast, after which a coastguard boat was sent to intercept it. The 13 suspects were arrested and referred to the proper authorities and charged with illegal entry.

KUWAIT: Investigations are ongoing to determine the source of a gunshot that left a man with a serious head injury in Jahra on Friday. A police source said that a stateless resident was coming out of his house in Taima when he was hit by a stray bullet. He was rushed in an ambulance to the Jahra Hospital in a critical condition. Police believe that the gunshot was likely fired by a person while celebrating Eid. A case was filed.

KUWAIT: A woman was arrested on several charges including attempted suicide and murder threats at the Bayan police station recently. According to a source, the woman had sent threatening messages to another woman who her ex-boyfriend had apparently left her for. After discovering that she was charged for threatening, the woman went to her foe’s house, stood outside with a knife in hand, called her and gave her the choice of either coming out or her barging in.

Police arrived within minutes in response to an emergency call, and they went in pursuit of the suspect who drove away at a high speed upon spotting patrol vehicles. After stopping at a roadblock, the woman pointed the knife at her chest and threatened to stab herself if approached. Firefighters were called and they managed to bring her under control after breaking the car’s window. She was taken to the psychiatric hospital after suffering a nervous breakdown during the incident.

KUWAIT: Fire department received a call at 2:50 am that a GMC car was on fire. The vehicle collided with a high voltage tower at Kabd area and some persons were trapped inside the car. Kabd firemen rushed to the scene headed by Captain Mohammad Al-Kandari and Lt. Ahmad Al-Rashidi.

As they arrived they found that the car was carrying a family, Kuwaitis and GCC nationals. Five of them were already dead and another 11 persons were severely injured. They were transported to the hospital by medical emergency team, while the bodies of the dead were handed over for criminal investigation. Investigation is going on to find reasons behind the accident.