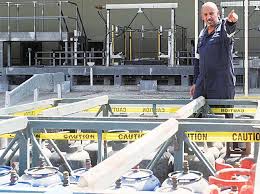 KUWAIT CITY, Sept 7: Kuwait Oil Tankers Company (KOTC) affirmed that misuse of gas cylinders in the local market creates extra financial burden for the state, adding the cost can be reduced if cylinders are well managed with cooperation between concerned authorities and consumers.

In a press release, the company emphasized the need for cooperation among commercial and private consumers to preserve the cylinders. It explained that 90 percent of the destruction to cylinders is due to accumulation of filth in the commercial sector, especially in some restaurants, central kitchens and barbecues.

It added that 12-kilogram cylinders used for commercial activities are categorized for private usage, while lack of special storage to keep them amounts to non-compliance with the safety and security procedures. The company also observed that rolling of the cylinders and throwing it from high places cause destruction, indicating that placing cylinders in water closet, playing with the valves, placing solid materials on the cylinders, using unwarranted commercial products, trying to remove the caps with sharp objects, cutting the rubbers that are meant to protect leakages, using cylinders in an upside down position, and dumping cooking oil and other waste items on it are aspects of the misuse.