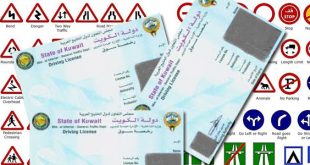 Advanced machines to be employed

They affirmed that the machines will be operated initially for receiving the transactions of citizens in principle followed by opening the door for expatriates in the near future.

It was earlier reported by the daily that the department would be using advanced electronic machines for the electronic issuance and renewal of Kuwaitis’ driving licenses all six governorates.

Sources from Ministry of Interior explained that a number of employees were given training on how to use the new system, and issue and renew the licenses electronically.