US not the police of the Middle East: Trump 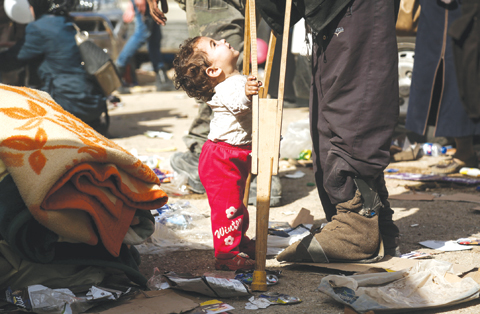 Trump added: “Russia, Iran, Syria & many others are not happy about the US leaving, despite what the Fake News says, because now they will have to fight ISIS and others, who they hate, without us.”I am building by far the most powerful military in the world. ISIS hits us they are doomed!” The US president faced intense opposition to his abrupt announcement Wednesday that Islamic State had been defeated in the region, and that he was ordering the 2,000 US troops in Syria to exit the country.

US allies were stunned after President Donald Trump declared victory over the Islamic State group in Syria and abruptly ordered the withdrawal of US ground troops from the country. The decision runs counter to long-established US policy for Syria and the region. It blindsided lawmakers, the Pentagon and international allies alike. Britain and France warned on Thursday that the fight against jihadists in Syria was not finished.

‘We won against ISIS’
Trump earlier said: “We’ve won against ISIS,” in a short video posted on Twitter. “We’ve beaten them and we’ve beaten them badly. We’ve taken back the land. And now it’s time for our troops to come back home.” A withdrawal could have major geopolitical ramifications, and plunges into uncertainty the fate of US-backed Kurdish fighters who have been tackling Islamic State jihadists, thousands of whom are thought to remain in Syria.
A US official told AFP that Trump’s decision was finalized Tuesday. “Full withdrawal, all means all,” the official said when asked if the troops would be pulled from across Syria. Currently, about 2,000 US forces are in the country, most of them on a train-and-advise mission to support local forces fighting IS. Pentagon officials scrambled for a reaction. A spokeswoman eventually said the Defense Department had “started the process” of bringing troops home.

Lawmakers assailed Trump’s decision, saying it could embolden Ankara to attack US-backed Kurdish fighters. Republican Senator Lindsey Graham, a Trump ally, said the president’s decision was unwise and put the Kurds “at risk.” Democratic Senator Jack Reed said it amounted to a “betrayal” of the Kurds that “provides further evidence of President Trump’s inability to lead on the world stage.” Blasting the move as a “huge Obama-like mistake,” Graham said “I fear it will lead to devastating consequences for our nation, the region and throughout the world.”

Most US troops are stationed in northern Syria, though a small contingent is based at a garrison in Al-Tanaf, near the Jordanian and Iraqi borders. Trump has previously voiced skepticism about the US presence in Syria, saying in March he wanted to bring troops home “soon.” But military advisors and international allies warned Trump against a precipitous pullout, and he later acquiesced to an indefinite Syria mission.

The US official would not provide a withdrawal timeline, saying only it would come “as quickly as possible.” White House spokeswoman Sarah Sanders said the US-led coalition that includes dozens of nations would continue fighting the jihadists. “These victories over ISIS in Syria do not signal the end of the Global Coalition or its campaign,” Sanders said in a statement.

The Pentagon refused to say what effect the troop withdrawal would have on air operations in Syria that have been ongoing since late 2014. A senior administration official said Trump’s decision was consistent with comments he has made for years. “The notion that anyone within the administration was caught unaware, I would challenge that,” the official said. – AFP